The Art of (Trade) War: Examining the Relationship Between the Political Economies of the U.S. and China Through the Lens of Previous Machiavellian Moments 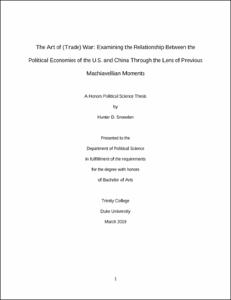 View / Download
342.4 Kb
Date
Author
Snowden, Hunter
Advisor
Malesky, Edmund
Repository Usage Stats
118
views
358
downloads
Abstract
This paper analyzes how the trade war between the United States and China is similar to that of the economic and political dispute between the English and the Dutch during the 17th century. Along the way, a revisiting of the political and economic theory behind the Machiavellian Moment, neo-Machiavellian political economy, and the rise and fall of the English and Dutch hegemonies was conducted. I then compared this compiled data with the trade policies and economic statistics of modern day China and the United States. Additionally, it evaluates whether there appears to be any significant overlap between the two eras with regard to the underlying cause and subsequent responses. From there, similarities and differences were drawn and logical intermediary conclusions were made based on the trends of each country’s political and economic structure. The study concludes that there is considerable correlation between the political economies of the Netherlands in the 17th century and the United States today as well as England in the 17th century and China today. Both sets of countries in each era encountered their own Machiavellian Moment and responded by either embracing a neo-Machiavellian political economy in the case of England and China, or maintaining their own problematic political economy in the case of the Netherlands and the United States.
Type
Honors thesis
Department
Political Science
Subject
Mercantilism
Political economy
Hegemony
Trade war
US-China
Machiavelli
Permalink
https://hdl.handle.net/10161/18199
Citation
Snowden, Hunter (2019). The Art of (Trade) War: Examining the Relationship Between the Political Economies of the U.S. and China Through the Lens of Previous Machiavellian Moments. Honors thesis, Duke University. Retrieved from https://hdl.handle.net/10161/18199.
Collections
More Info
Show full item record