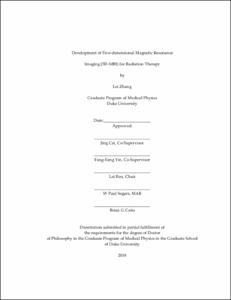 Accurate delineation of tumor target and organs at risk (OARs) is critically important in modern radiation therapy for optimal treatment planning and precise treatment delivery. Conventionally, radiotherapy treatment planning uses 2D X-ray or 3D CT images to assist the delineation of tumor volumes and OARs, often under free-breathing condition. In modern radiation therapy, four-dimensional (4D) imaging is the state-of-art technique for imaging respiratory motion of thoracic and abdominal cancers. However, its application for abdominal cancers has been limited due to the low soft-tissue contrast of CT. Recently, a number of 4D magnetic resonance imaging (4D-MRI) techniques have been developed to overcome the limitations of 4D-CT in abdominal cancer applications. In contrast to 4D-CT, 4D-MRI imposes no ionizing radiation dose to the patient and offers superior soft-tissue contrast.

However, current 4D-MRI techniques also have limitations that prevent them from being widely adapted in routine clinical practices. For example, current techniques are all developed based on one particular MR sequence with a particular imaging contrast, which may not be optimal or consistent across patients. Furthermore, current 4D-MRI techniques are often affected by patients’ breathing variations, leading to significant motion artifacts in 4D-MRI images and adversely affects its image quality and thus clinical applicability.

The overall goal of this dissertation is to develop a novel 5D-MRI technique to overcome current limitations of 4D-MRI. The 5D-MRI technique is developed by synergizing three main technical components: multi-source MRI fusion (MSMF), 4D-MRI, and deformable image registration (DIR). 5D-MRI is an extension of 4D-MRI, embedding all the characterizations of 4D-MRI with an additional dimension of “image contrast”. The MSMF method consists of five key components: input MR images, image pre-processing, fusion algorithm, fusion adaptation, and output fused MR images. A linear-weighting fusion algorithm was implemented for MSMF in this study to demonstrate the proof of concept. Fusion options (weighting parameters and image features) are pre-determined with given input MR images and saved in a database for fast fusion adaption. 5D-MRI images were generated by applying the 4D displacement vector fields (4D-DVF) determined from the original 4D-MRI via DIR onto each of the fused MR images.

The 5D-MRI technique was tested on a digital human phantom (XCAT) and a liver tumor patient. 5D-MRI images were qualitatively evaluated for image contrast versatility, and quantitatively evaluated for image quality and motion accuracy. For the latter, motion trajectories of the liver tumor in the superior-inferior (SI) direction were determined from each of the 4D-MRI image sets of 5D-MRI and compared with those tracked on the single-slice sagittal cine MR images. Mean difference in displacement (D) and correlation coefficient (CC) were determined for each comparison.

For both the XCAT phantom and the liver tumor patient, the MSMF method produced more than a large number of fused MR images with versatile image contrasts and improved image quality, each presenting a unique set of anatomical and image features. Among twenty-four liver cancer patients, the average tumor CNR was significantly improved from a range of -1.80 to 8.05 in the four single contrast source MR images, to 22.51 in the fused MR images. The standard deviation of tumor CNR among the 24 patients was 0.87, which suggested high level of consistency. 5D-MRI images clearly demonstrated the respiratory motion during breathing in each 4D-MRI set. Liver tumor motion trajectories measured from 5D-MRI images closely matched with that from the reference cine MR images: D ranged from 0.402 to 0.561 mm (mean=0.463 mm) and CC ranged from 0.980 to 0.987 (mean=0.986).

In this dissertation, beyond the developmental work for the 5D-MRI technique, a novel organ segmentation method, which is an extension of the multi-source MRI fusion technique, and an image mutual-information (MI) based 4D-MRI improvement technique are also presented.

In summary, a novel 5D-MRI technique was developed and its feasibility on digital human phantom and liver tumor patients is demonstrated. Two exploratory projects extending and improving the 5D-MRI technique are also presented. The developed 5D-MRI technique is capable of producing a large number of synthetic 4D-MRI images with versatile image contrasts and improved image quality, holding great promises in enhancing MRI applications for radiation therapy.