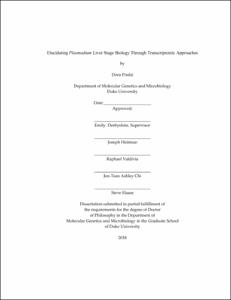 Malaria is one of the leading causes of mortality attributed to infectious diseases worldwide. Every year, hundreds of thousands of children succumb to the disease and hundreds of millions more suffer the characteristic symptoms of malaria. It is caused by eukaryotic parasites of the genus Plasmodium and is transmitted to the human host via the bite of an Anopheles mosquito. Upon infection, the parasite must travel to the liver where it develops and replicates into merozoites, the parasite form that is able to infect red blood cells. It is only after release back into the blood stream as a merozoite that the parasite invades red blood cells, leading to the manifestation of disease.

The liver stage is clinically silent, yet an obligatory stage of the Plasmodium life cycle. Our knowledge of this portion of the life cycle is lagging compared to that of the blood stage because of inherent difficulties in experimental design. In particular, very little is known about the host and parasite gene expression during the early hours of infection. This work seeks to gain a greater understanding of the biological processes of host and parasite throughout the liver stage of infection through dual-RNA sequencing. We first utilize next-generation sequencing to map the global transcriptional state of the P. berghei-infected hepatocytes during the entire course of the liver stage infection. We find the most significant changes in gene expression occur early during infection and are primarily related to the host mounting an immune response. During mid to late time points of P. berghei infection of hepatocytes, genes related to host metabolism are enhanced among the differentially expressed genes, indicating a shift in active cellular processes later in infection.

From the host transcriptomic dataset, we identify aquaporin-3 (AQP3), a water and glycerol transporting membrane protein, as significantly induced upon P. berghei infection. Microscopic experiments reveal that the host AQP3 protein is trafficked to the parasitophorous vacuole membrane (PVM), the interface between the parasite and host cytosol. Through molecular genetic and chemical approaches, we show host AQP3 is essential for the proper development of the parasite during the liver and blood stages of the life cycle. Phenotypic studies suggest AQP3 is utilized by the parasite to obtain nutrients for growth.

Lastly, we also utilize target-based screens to identify novel antiplasmodial small molecules that have potential for treating liver stage malaria. We interrogate the species specificity of a panel of Hsp90 small molecules inhibitors and seek to understand the chemical moieties that determine species selectivity. We also utilize cell-based assays to screen for and identify compounds that act synergistically. The work presented herein sheds light on novel host-parasite interactions during the liver stage of Plasmodium infection and explores novel small molecules for malaria treatment.