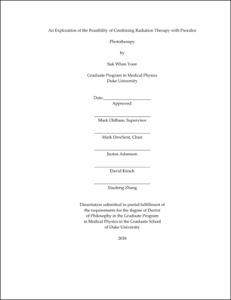 Radiation therapy (RT) has been a standard-of-care treatment for many localized cancers for decades. Despite being an effective treatment modality for many clinical presentations, the efficacy of RT against cancer can be limited due to local recurrence, metastatic spread, and radiation resistance from tumor hypoxia. These limitations provide opportunity for innovative approaches to enhance the overall efficacy of RT. This thesis explores the potential novel approach to enhancing RT through the paradigm changing approach of adding a phototherapeutic component initiated simultaneously with RT. X-ray Psoralen Activated Cancer Therapy (X-PACT) is one such approach, where diagnostics-energy kilovoltage (kV) x-ray coupled with energy modulators (phosphors) converts kV photon to ultraviolet (UV) light, which in turn activates psoralen. Radiotherapy Enhanced with Cherenkov photo-Activation (RECA) is another approach, where therapeutic megavoltage (MV) x-ray generates UV light via Cherenkov phenomenon. Both approaches could increase local control in RT, increase treatment effectiveness in hypoxic tumors, and amplify anti-cancer systemic response. The overarching hypothesis that drives this dissertation is that X-PACT and RECA can activate psoralen to enhance cytotoxicity in-vitro and tumor growth control in-vivo compared to RT alone. In line with this hypothesis, this work explores the feasibility of both X-PACT and RECA via in-vitro and in-vivo verification as well as optimization of radiation techniques to maximize the therapeutic benefit of the approach.

X-PACT and RECA in-vitro / in-vivo studies indicate radiotherapy enhancement is plausible with psoralens activated by secondary UV light production from radiation, though further investigation is required to establish feasibility of RECA in-vivo. For X-PACT in-vitro, a substantial reduction in cell viability and increase in apoptosis was observed in various murine cancer cells (4T1, KP-B, and CT2A) when treated with a combination of 50µg/mL phosphor, 10µM psoralen (8-MOP), and 1Gy of 80kVp x-ray (viability < 20%), compared to any of these components alone (viability > 70%). This suggests a synergistic interaction between the components congruent with the X-PACT scheme, where x-ray induces phosphor UV emission, which in turn activates psoralen. The X-PACT in-vivo mice study showed improved survival with X-PACT versus saline control with flank 4T1 tumors (30.7 days for X-PACT vs. 21.6 days for saline) for survival criteria of 1000, 1500, and 2000mm3, respectively. For RECA, in-vitro results seem promising, where reductions in viability of 20% and 9.5% were observed for 4T1 and B16 murine cancer cell lines treated with RECA (radiation + trioxsalen, a potent psoralen derivative) versus radiation alone. A substantial increase in MHC I expression was observed for B16 cells treated with RECA versus those treated with radiation alone. A small RECA in-vivo pilot study using 8-MOP was inconclusive. Further in-vivo trials with a greater number mice per arm of are required to establish the RECA feasibility to enhance radiotherapy.

Feasibility of treatment optimization for both X-PACT and RECA were demonstrated with kV and MV beams respectively, by optimization of optical output per radiation dose delivered. It was found that in both X-PACT and RECA scheme, the energy of the photon radiation beam (i.e. tube voltage and LINAC energy settings) affected optical output the most. With kV beams for X-PACT, accurate beam delivery within the target volume to reduce normal tissue damage typically expected of kV beams was demonstrated with a 3D-printing-based preclinical irradiation scheme, which is expected to help X-PACT translation into the clinics. In addition, for X-PACT, novel MV-responding phosphors were characterized under MV radiation beam, suggesting the possibility of MV-radiation-mediated X-PACT. Immediate future studies should investigate the efficacy of the optimized X-PACT and RECA, as well as MV X-PACT in-vitro and in-vivo. Studies beyond these immediate ones should investigate X-PACT and RECA efficacy against hypoxic and metastatic tumor sites, where radiation can traditionally fail.