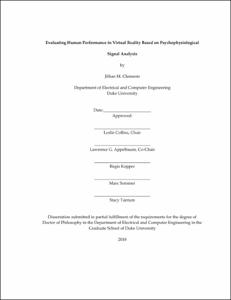 Physiological signals measured from the body, such as brain activity and motor behavior, can be used to infer different physiological states or processes in humans. Signal processing and machine learning often play a fundamental role in this assessment, providing unique approaches to analyzing and interpreting physiological data for a variety of applications, such as medical diagnosis and human-computer interaction. In this work, these approaches were utilized and adapted for two separate applications: brain-computer interfaces (BCIs) and the assessment of visual-motor skill in virtual reality (VR).

The goal of BCI technology is to allow people with severe motor impairments to control a device without the need for voluntary muscle control. Conventional BCIs operate by converting electrophysiological signals measured from the brain into meaningful control commands, eliminating the need for physical interaction with the system. However, despite encouraging improvements over the last decade, BCI use remains primarily in research laboratories. One of the biggest obstacles limiting their daily in-home use is the significant amount of time and expertise that is often required to set up the biosensors (electrodes) for recording brain activity. The most common modality for brain recording is electroencephalography (EEG), which typically employs gel-based “wet” electrodes for recording signals with high signal-to-noise ratios (SNRs). However, while wet electrodes record higher quality signals than dry electrodes, they often hinder frequent use because of the complex and time-consuming process of applying the electrodes to the scalp. Therefore, in this research, a signal processing solution was implemented to help mitigate noise in a dry electrode system to facilitate a more practical BCI device for everyday use in people with severe motor impairments. This solution utilized a Bayesian algorithm that automatically determined the amount of EEG data to collect online based on the quality of incoming data. The hypothesis for this research was that the algorithm would detect the need for additional data collection in low SNR scenarios, such as those in the dry electrode systems, and collect sufficient data to improve BCI performance. In addition to this solution, two anomaly detection techniques were implemented to characterize the differences between the wet and dry electrode recordings to determine if any additional types of signal processing would further improve BCI performance with dry electrodes. Taken as a whole, this research demonstrated the impact of noise in dry electrode recordings on BCI performance and showed the potential of a signal processing approach for noise mitigation. However, further signal processing efforts are likely necessary for full mitigation and adoption of dry electrodes for use in the home.

The second study presented in this work focused on signal processing and machine learning techniques for assessing visual-motor skill during a simulated marksmanship task in immersive VR. Immersive VR systems offer flexible control of an interactive environment, along with precise position and orientation tracking of realistic movements. These systems can also be used in conjunction with brain monitoring techniques, such as EEG, to record neural signals as individuals perform complex motor tasks. In this study, these elements were fused to investigate the psychophysiological mechanisms underlying visual-motor skill during a multi-day simulated marksmanship training regimen. On each of 3 days, twenty participants performed a task where they were instructed to shoot simulated clay pigeons that were launched from behind a trap house using a mock firearm controller. Through the practice of this protocol, participants significantly improved their shot accuracy and precision. Furthermore, systematic changes in the variables extracted from the EEG and kinematic signals were observed that accompanied these improvements in performance. Using a machine learning approach, two predictive classification models were developed to automatically determine the combinations of EEG and kinematic variables that best differentiated successful (target hit) from unsuccessful (target miss) trials and high-performing participants (top fourth) from low-performing participants (bottom fourth). Finally, in order to capture the more complex patterns of human motion in the spatiotemporal domain, time series methods for motion trajectory prediction were developed that utilized the raw tracking data to estimate the future motion of the firearm controller. The objective of this approach was to predict whether the controller’s virtually projected ray would intersect with the target before the trigger was pulled to shoot, with the eventual goal of alerting participants in real-time when shooting may be suboptimal.

Overall, the findings from this research project point towards a comprehensive psychophysiological signal processing approach that can be used to characterize and predict human performance in VR, which has the potential to revolutionize the design of current simulation-based training programs for realistic visual-motor tasks.