Educating for a New Economy: The Struggle to Redevelop a Jim Crow State, 1960-2000 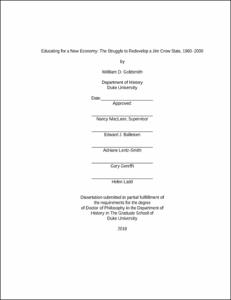 This dissertation shows how an array of policymakers, invested in uprooting an unequal political economy descended from the plantation system and Jim Crow, gravitated to education as a centerpiece of development strategy, and why so many are still disappointed in its outcomes. By looking at state-wide policymaking in North Carolina and policy effects in the state’s black belt counties, this study shows why the civil rights movement was vital for shifting state policy in former Jim Crow states towards greater investment in human resources. By breaking down employment barriers to African Americans and opening up the South to new people and ideas, the civil rights movement fostered a new climate for economic policymaking, and a new ecosystem of organizations flourished to promote equitable growth. At first, they sought to create a high-wage economy based on the industrial North. But as branch-plant recruitment faltered as a development strategy, these policy advocates turned to worker co-operatives, entrepreneurial incubators, and improved education as an alternative. Kids were the new cash crop in part because policymakers came to believe that economic growth—for the locality, for the state, for the nation, for all countries at all times—depended on innovators and entrepreneurs. American workers, too expensive to perform physically grueling industrial chores in an unevenly governed global economy, had to be ready and willing to toss away old skills and acquire new ones to fit whatever tasks the innovators found humans still useful to perform. By stressing the economic value of education, these policy advocates succeeded—for a time—in boosting state and local spending. But this came at the cost of democratic rationales for public schools. Moreover, this approach failed to stabilize rural communities hurt by manufacturing job losses.