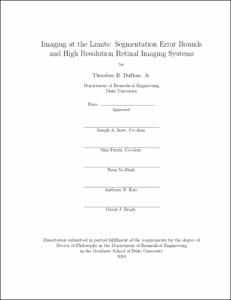 The human retina is essential to quality of life and therefore a topic of intense clinical and research interest. The combination of this interest with modern biophotonics has yielded a number of technological and medical developments now in various stages of adoption.

Optical coherence tomography (OCT) is a noninvasive optical imaging technique that utilizes coherent light to produce 3-D images with resolutions as fine as a micrometer. Since its invention in 1990, it has become part of the standard of care in opthalmology, shedding new light on the progression of diseases, therapeutic efficacy, childhood development, and real-time surgery in the retina. OCT has also found applications in microscopy, cardiology, pulmonology, and many other fields.

OCT has become valuable for the standard of care primarily due to its abilities to visualize the structural and functional layers of the retina. The thicknesses and volumes of certain can be used as diagnostic criteria and thus there is a high demand of OCT image assessment. In response, many researchers have developed software algorithms to automatically identify and mark, or segment, each layer.

Scanning light ophthalmoscopy or scanning laser ophthalmoscopy (SLO) is similar to OCT but uses confocal gating to produce high-contrast high-speed en face images of the retina. Although SLO has not become as prevalent as OCT in the clinic, it is frequently combined with adaptive optics (AO) to produce extremely high-resolution images of rod and cone photoreceptors, ganglion cells, and moving blood cells in the living retina.

AO is a technique to eliminate image blurring due to monochromatic aberrations in optical systems. By using a spatial light modulator, such as a deformable mirror or liquid crystal array, the wavefront of a beam sent into the eye can be engineered to compensate for the eye's aberrations. AO-SLO was initially developed in 2002 and has continued to be a field of research growth and interest. However, the majority of AOSLO systems require a dedicated room and staff, hindering their clinical adoption