A Role for Gic1 and Gic2 in Promoting Cdc42 Polarization 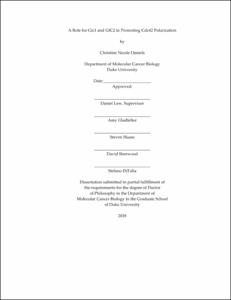 The Rho GTPase Cdc42 is a master regulator of cell polarity that orchestrates reorganization of the cytoskeleton. During polarity establishment, active GTP-Cdc42 accumulates at a part of the cell cortex that becomes the front of the cell. Localized GTP-Cdc42 orients the cytoskeleton through a set of “effector” proteins that bind specifically to GTP-Cdc42 and not GDP-Cdc42. A family of Cdc42 effectors, called GICs in yeast and BORGs in mammals, have been implicated in regulation of both the actin cytoskeleton and the septin cytoskeleton. Yeast cells lacking both Gic1 and Gic2 are able to polarize and grow at low temperatures, but many mutant cells fail to polarize the cytoskeleton at high temperature. This led to the conclusion that GICs communicate between Cdc42 and different cytoskeletal elements.

To better characterize the role of GIC proteins in yeast, we utilized time-lapse fluorescent microscopy to examine morphogenetic events in living single cells. Surprisingly, we found that not only the cytoskeleton but also Cdc42 itself failed to polarize in many gic1 gic2 mutant cells at high temperature. This observation indicates that GICs may act upstream of polarization rather than downstream.

Polarization of Cdc42 is triggered by cell-cycle progression, and in particular by G1 Cyclin-dependent kinase (CDK) activity. Using a live-cell reporter for G1 CDK activation, we found that cells lacking GICs were not defective in CDK activation, but showed a specific defect in polarization downstream of the CDK. Previous work had implicated the scaffold protein Bem1 in a positive feedback loop important for polarization. Cells lacking GICs failed to polarize Bem1 as well as Cdc42 at high temperature. Future work will be directed at understanding how GICs contribute to polarity establishment. Because many of the mechanisms and proteins involved in polarization are highly conserved, we anticipate our findings will help inform how this process regulated in higher eukaryotes.