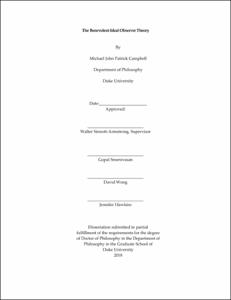 This dissertation provides an answer to what I call the central question of moral philosophy: what, if anything, is moral value? The answer, I argue, is that moral value is the relational property of eliciting a suitable response from a properly informed, rational, benevolent and otherwise minimal spectator. I call this theory the response-dependent benevolent ideal observer theory or BIORD.

Although the way in which I express and argue for BIORD is original and unique, the core of the theory is old. In chapter 1, I explore these historical roots. The notion that moral value depends, in some sense, upon the reactions of an idealised spectator stretches back at least to Adam Smith and, I argue, to his tutor Francis Hutcheson. I explore how a natural connection between ideal observers, benevolence and utilitarianism has often been assumed without being explicitly argued for.

In chapter 2, I lay out certain crucial meta-theoretical assumptions that help to motivate BIORD. I argue against the methodology of conceptual analysis and in favour of a revisionary approach sometimes called ‘conceptual ethics’. I explore the theoretical aims that ought to guide the conceptual ethicists’ project before arguing in favour of a response-dependent metaethics, in contrast to other sentimentalist theories such as fitting-attitude accounts. The response-dependent schema states that an object is morally valuable if and only if a particular agent would have a particular reaction to it (in certain circumstances).

In chapter 3, I argue that the agent that ought to fill the response-dependent schema is a properly informed, rational, benevolent and otherwise minimal spectator. I define benevolence as a final care directed towards the welfare of conscious creatures and thus argue in favour of welfarism: the view that welfare is the only essential moral value.

In chapter 4, I discuss which of the benevolent observer’s reactions are best thought of as relevant, and which objects are best thought of as the bearers of both essential and non-essential moral value. I suggest that any attitude which lacks the property of being ‘truth-oriented’ is relevant. Arguments concerning the objects of value leads to a discussion of Parfit’s Repugnant Conclusion, which BIORD entails. I argue that we ought to embrace it. Lastly, I discuss the objects of non-essential value, showing how BIORD can capture some intuitions that value pluralists might otherwise use against it.

Finally, in chapter 5, I discuss how accepting BIORD would impact our moral discourse, arguing in favour of a radical eliminativist proposal in which deontic language is abandoned in favour of comparative value-talk. I then discuss how BIORD can provide us with a theory of reasons.