Deliberative Bayesianism: Abduction, Reflection, and the Weight of Evidence 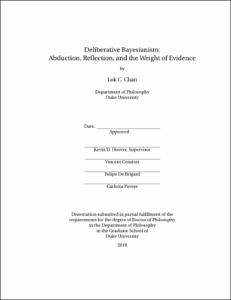 In this dissertation, I defend the thesis that an epistemic judgment of probability must be interpreted against the background of the context of inquiry in which it is made: in the abductive context, judgments of probability are matters of decision, made strategically in service to the investigative goal of the inquirer; in deduction, probabilities are derived based on the premises chosen in abduction, in order to explicate the implied commitments the agent may incur from those decisions; during the inductive stage, the inquirer is expected to conduct her empirical investigation in a deliberate manner, in accordance with the assertions and decisions she made during abduction and deduction, collectively referred to as the deliberative context.

I set the stage by proposing a pragmatist reading of Bas van Fraassen's Reflection Principle and his voluntarist interpretation of assertions of degrees of beliefs as performative locutions to express the intention to undertake a proportional epistemic commitment. I argue for a refinement of this view that I call deliberativism, which introduces an abductive dimension to understand the normative force that regulates these epistemic judgments. I then argue that decisions made in the context of abduction have inferential repercussions on the validity of inductive inference. In particular, I situate deliberativism in the context of statistical inference by critically examining a problem in the literature called optional stopping, which occurs when the experimenter's intention to stop can manipulate the statistical significance of the data. The last chapter explores the Pericean idea of deductive reasoning as the strategic interrogation of a provisionally chosen hypothesis by focusing on J. M. Keynes' notion of the weight of evidence.