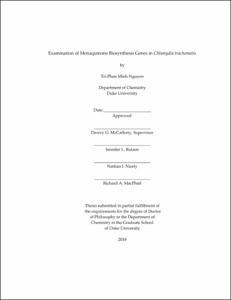 The obligated intracellular bacterium Chlamydia trachomatis is a pathogen of immense clinical and societal importance with over 1.5 million cases of new infection reported annually in the United States alone. With asymptomatic infection and no acquired immunity, Chlamydia infection often lead to epithelial scaring, ectopic pregnancy and infertility. Worldwide, the pathogen also responsibles for the ocular infection called trachoma that is the leading cause of infectious blindness. The bacteria have a diminutive genome consist of just over 900 genes. In addition, C. trachomatis had been historically refractory toward genetic manipulation. With the bacteria relied upon the host for basic metabolic resources, it is hypothesized that the genes retained in its genome is essential for the infectivity, pathogenesis and life cycle of bacteria. Through bioinformatics tools like sequence similarity networks, we have found that Chlamydia retained a complete set of genes involved in the biosynthesis of menaquinone, a membrane bound electron shuttle essential for cellular respiration. The biosynthesis of menaquinone in C. trachomatis involve the recently discovered futalosine pathway. In this project, we developed a molecular toolkit to examine the individual Chlamydial genes involved in menaquinone biosynthesis for its enzymatic function and essentiality. We employed small molecule inhibitors to chemically probe the function of genes in a cellular infection model and found that certain inhibitors of the menaquinone biosynthesis are effective at inducing inhibitory phenotype. Next, we developed a library of codon-optimized expression plasmid for recombinant expression of the Chlamydial protein in E. coli. We were able to enzymatically characterize and structurally determine the flavin prenyltransferase protein CT220 and its involvement in menaquinone biosynthesis. We also utilized E. coli mutants to test the function of the Chlamydial genes using genetic complementation. Lastly, we were able to improve the processes for plasmid-based mutagenesis of C. trachomatis using the recently developed fluorescent reported allelic exchange mutagenesis tool.