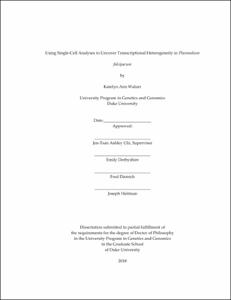 Malaria persists as a global health problem, with 212 million cases and 429,000 deaths worldwide in 2015 alone. It is caused by the apicomplexan parasite Plasmodium, which follows a complex life cycle that consists of multiple stages spanning from the human host to the mosquito vector. Among the Plasmodium parasites causing human malaria, the deadliest species is Plasmodium falciparum. Most P. falciparum parasites follow an asexual cycle in human erythrocytes that is characterized by a tightly synchronized continuous cascade of gene expression, although a small proportion commits to a sexual fate. Parasites committed to the sexual stage develop into male and female gametocytes over 9-12 days, with mature gametocytes being the only form of the parasite transmissible to the mosquito vector.

This commitment to a sexual fate is rare, and little is known about the transcriptional programs related to sexual commitment and mating-type determination. Furthermore, discrete changes that occur in these cells are largely undetectable in traditional bulk-cell analyses. Bulk-cell analyses were used to establish models for synchronous stage-specific transcriptional programming during the asexual intraerythrocytic developmental cycle (IDC) but left little resolved in terms of cellular heterogeneity and cell-fate decisions. Due to these limitations, we developed unbiased single-cell approaches on a microfluidic platform to analyze single parasites during late asexual and sexual stages. This work was divided into two main parts. The first focused on single-cell gene expression in male and female mid-to-late stage gametocytes. We captured 90 single parasites and compared the expression of 91 genes, including 87 gametocyte-specific genes. Our analysis identified distinct gene clusters whose expression associated with male, female, or all gametocytes. In addition, a small number of male gametocytes clustered separately from female gametocytes based on sex-specific expression independent of stage. RNA fluorescent in situ hybridization (RNA-FISH) validated the mutually exclusive expression pattern of male and female transcripts in gametocytes. These analyses uncovered novel male and female markers that are expressed as early as stage III gametocytogenesis, providing further insight into Plasmodium sex-specific differentiation previously masked in population analyses.

The second part of this work centered on single-cell RNA sequencing (scRNA-seq) of P. falciparum late asexual and sexual stages. First, we uncovered a large number of previously undefined gametocyte-specific genes. 46 asexual cells were then segregated into three separate clusters based on the differential expression of SERAs, rhoptries, and EXP2 plus transporters. RNA-FISH of cluster-specific genes validated this distinct stage-specific expression during the IDC and defined the highly variable transcriptional pattern of EXP2. Additionally, these analyses indicated huge variations in the stage-specific transcript levels among parasites. Overall, scRNA-seq and RNA-FISH of P. falciparum revealed distinct stage transitions and unexpected degrees of heterogeneity with potential impact on transcriptional regulation during the IDC and adaptive responses to the host.