A Computational Framework for Fracture Modeling in Coupled Field Problems 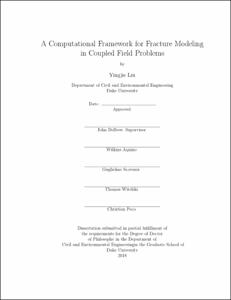 This dissertation proposes a family of computational frameworks for fracture modeling in coupled field problems. Fracture mechanics has been a topic of considerable interest for several decades due to the wide existence of fracture in different engineering structures and the important applications of fracture in multiple industries.

The present study first develops a continuum-discrete approach to model the fluid-driven fracture of granular media. This approach avoids remeshing by representing the particles as moving interfaces on a fixed background mesh. The effect of particle movement on the flow is characterized by a non-slip boundary condition. A boundary split scheme is proposed to ensure the coercivity of the method. The fluid-driven force on particles is represented by a boundary integral of the viscous drag force around the particles. The corresponding initial-boundary value problem is constructed for the invading fluid and is spatially discretized with the finite element method. A novel quadrature method is developed to handle partial elements that arise due to the mismatch between the mesh and the physical domain. The conditioning issue of partial elements is also addressed in the present study.

The present study also aims at developing a general and robust computational approach for the fracture modeling of conventional materials within coupled field problems. We follow the framework of a phase field regularization because of its strength in handling complex fracture patterns. The first application we consider is the fracture simulation of kidney stones during shock wave lithotripsy (SWL), an acoustic-solid-fracture coupling problem. The present study develops a novel computational framework for simulating SWL.

The propagation of acoustic pressure is modeled by a wave equation and the deformation of the phantom stone is modeled by the elasto-dynamics equations. The interactions between the acoustic wave and kidney stone is enforced via the continuity condition. The initialization and propagation of fracture within the stone is implicitly represented by the evolution of the phase field.

Traditional phase field is designed to model the brittle fracture of homogeneous materials. The present study develops a phase field framework to model fracture propagation in anisotropic and heterogeneous solids. The present model is distinguished from the traditional phase field approach by the fact that it converges to a cohesive type model instead of a Griffith model. A mathematically self-consistent strain energy density functional is proposed that is valid for any anisotropic linear elastic materials. Anisotropy in both the bulk moduli and the crack surface energy are characterized. The model employs multiple phase fields to capture the fracture behavior of the material with more than one preferential cleavage plane. The model develops a novel degradation function which relaxes the strong constraint between the regularization length l and the material properties. The convergence of the model with reducing l and the energy conservation properties of the framework are demonstrated through numerical examples. A robust adaptivity strategy is developed to increase the efficiency of the model. The present framework is applied to model fracture in heterogeneous and anisotropic materials. Coupled with a fine scale analysis, the present model is also used to model the fracture of functionally graded materials.