Functional studies of the domains of Piezo1 ion channels 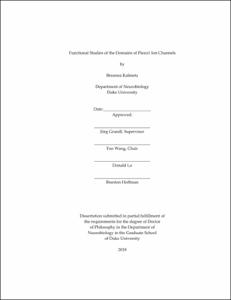 Mechanosensation, or the ability to sense mechanical forces, is critical for the survival of all organisms. For vertebrates, the ability to sense and respond to environmental stimuli, or somatosensation, is not well understood at the neural circuit level, and the molecular underpinnings for somatosensation, especially in regards to mechanosensation, remain elusive and unresolved. In recent years, Piezo ion channels were discovered as the first mammalian excitatory bona fide mechanosensitive ion channel to be the initial molecules in sensing gentle touch in the somatosensory neural circuitry. Although physiological roles of Piezo ion channels for both somatosensation and other non-neuronal processes have been identified, the mechanisms for how these ion channels directly sense mechanical forces and transduce electrical signals remains unknown.

With the use of biochemical, molecular, and electrophysiological methods, I first developed a novel technique in which electrophysiology could be performed on microsomes, or vesicles formed from ER fractions containing proteins that are not trafficked to the plasma membrane. This experiment revealed that wild-type Piezo1 ion channels retain stretch activation in microsomes, and therefore this technique could be utilized to characterize mutants channels that lack trafficking to the plasma membrane in order to identify which domains are involved in activation and inactivation of Piezo ion channels. I next generated two separate constructs that removed domains suggested to be involved in activation and inactivation of Piezo1. Removal of the proposed inactivation domain rendered a non-functional channel that could still trimerize, suggesting that this domain not only plays a role in inactivation but also is critical for activation of Piezo1 ion channels. Partial removal of the proposed membrane-spanning mechanosensor domains produced a channel that lacked the ability to conduct large macroscopic currents but formed a conducting pore with single channel openings. This finding suggests that membrane tension is not sensed and transduced to the pore by a single domain, but rather multiple domains in concert. Together the findings provide evidence that the mechanisms for both activation and inactivation require multiple domains moving in collaboration together, and will broadly be informative for continued studies of the molecular mechanisms of mechanosensitive ion channels.