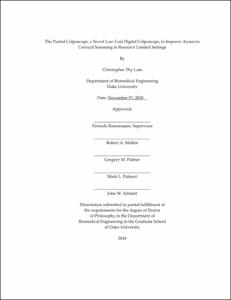 Addressing disparities in the global cancer burden is a key part of the post-2015 Millennium Development Goals (MDGs). Cervical cancer is emblematic of that disparity, with 85% of cases and cancer-related deaths occurring in low and middle-income countries (LMICs). Many LMICs lack the health care infrastructure and highly trained personnel required for cytology-based screening and subsequent referral colposcopy based diagnosis, which have dramatically reduced the disease burden in wealthier countries. The World Health Organization (WHO) recommends adoption of alternative protocols that employ low-cost and simple-to-use screening technologies and treat all women who are positive based on these tests. Even those who manage to receive a proper diagnostic test are all too frequently lost to follow up care, leading to a disproportionately high burden of cervical cancer mortality in LMICs. One strategy, highly sensitive human papillomavirus (HPV) testing has been shown to reduce the incidence and mortality from cervical cancer when coupled directly with outpatient treatment for women with HPV-positive results. Although, recent guidelines have moved back from this “screen & treat” approach, given concerns about overtreatment. The American Society of Clinical Oncology (ASCO) and World Health Organization (WHO) recently released guidelines recommending that HPV be used as a screening test, followed by triage with visual inspection with acetic acid (VIA) or visual inspection with Lugol’s iodine (VILI) to confirm the presence of lesions. Uptake of HPV testing requires a significant capital investment in the automated device and samples are often banked and run in batches to reduce waste of reagents. While this co-testing methodology may decrease overtreatment, VIA or VILI still remains a poor triage test because of low sensitivity and specificity, and wide variability in interpretation due to poor quality control. Thus, there exists a need for a triage test that is low-cost, easy-to-use, and will provide reliable immediate results at the point-of-care setting.

The goal of the work presented here is to establish the design, development, and validation of a low cost portable digital colposcope that has comparable image quality, functionality, and diagnostic capability when compared to standard-of-care digital colposcopes and gold-standard histopathology.

Three specific aims were proposed to address this goal. First, the conceptualization, design, and validation of this device, the Pocket Colposcope will be presented. The Pocket Colposcope is shaped like a tampon and can be inserted and positioned such that it is 5-50 mm away from the cervix, obviating the need for high-end glass optics, high-resolution cameras, and high power illumination sources used in state of the art colposcopes, which typically operate at a working distance of 300 mm. An off the shelf miniature color complementary metal-oxide-semiconductor (CMOS) camera, with plastic injection molded lens, and small light emitting diodes (LEDs) could be repackaged inside the compact tampon like form factor and powered directly by a smartphone, tablet, or laptop through the universal serial bus (USB).

Each evolution of the Pocket Colposcope was quantitatively assessed with respect to standard-of-care digital colposcope or predicate device using industry standardized protocols and in preparation for the application to the US Food and Drug Administration (FDA) 510(k) preexisting medical device approval pathway. The Edan C3A/C6A digital colposcope (K151878) was used as the predicate reference device within the Pocket Colposcope’s 510(k) application which was successfully approved on September 25th, 2018 (K181034), which was granted on September 25th, 2018. We also characterized and compare the Pocket Colposcope to the standard-of-care digital colposcope at Duke University Medical Center (DUMC) the Leisegang Optik 2 (K140754), which was use as part of multisite international clinical trial evaluating the diagnostic performance of Pocket Colposcope discussed in Aim 2. The essential imaging parameters were characterized with industry standards: ISO 8600-5 used for optical resolution, ISO 8600-3 used for field of view, ISO 9039 and ISO 12233 used for distortion, depth of field, and ISO 18221 used for magnification. The essential illumination characteristics were characterized with: ANSI FL-1 was used for both beam diameter and illumination intensity.

The proof of concept first generation Pocket Colposcope was successful in capturing VIA and VILI images of the cervix, but suffered from issues that were addressed in subsequent generations. These issues included: frequent lens fogging, which required the use of anti-fogging wipes prior to each patient use, the need for ethylene oxide (EtO) gas sterilization between patient uses, a difficulty maintaining image focus due to lack of automated mechanism, and a reduced image quality due to specular reflection from the moist cervical tissue when compared to standard-of-care digital colposcope.

The second aim was to demonstrates concordant diagnostic performance of the Pocket Colposcope when compared to reference standard-of-care digital colposcopes and gold-standard histopathology in a multi-institution clinical trial.

An image concordance study was conducted under IRB approval and written informed consent of participants. Images of the cervix were collected by the Pocket Colposcope and standard-of-care device (if available) along with gold standard histopathology. These image pairs would be split, randomized, and digitally sent to blinded highly trained reviewers for clinical interpretation. These expert colposcopists were blinded to any demographic information of the patient, prior referral test results (Pap smear cytology, HPV status, HIV status, or histopathology), and each other’s interpretation of the image. A secure online questionnaire was sent to reviewers to record their responses. All data was stored securely on a Duke University Medical Center managed REDCap database server.

These interpretations would be compared between the Pocket Colposcope and standard-of-care device to demonstrate concordance performance or level agreement with the devices. The diagnostic performance of the Pocket Colposcope and standard-of-care devices were assessed by comparing the image interpretation to gold-standard histopathology with the generation of 2x2 contingency tables with entries for True Positives (TP), True Negatives (TN), False Positives (FP), and False Negatives (FN). The two binary diagnostic cut-offs were used: normal vs. LSIL/CIN1+ and normal vs. HSIL/CIN2+. From these 2x2 contingency tables sensitivity, specificity, positive predictive value (PPV), and negative predictive value (NPV). Lastly, the diagnostic performance would be stratified by level of contrast used using Receiver Operating Characteristic (ROC) curves where the y-axis is the sensitivity and the x-axis is 1-specificity. The resultant area under the curve (AUC) can be compared using logistic regression to determine how changing the type of contrasts used impacts overall diagnostic performance.

The performance of the Pocket Colposcope was now assessed as part of the multinational clinical study with two additional partner sites joining the two prior sites: Kilimanjaro Christian Medical Center (KCMC) (Moshi, Tanzania) which used a digital camera (Canon SX40HS) as the standard-of-care device for part of the study, however the device broke and wasn’t repaired until this summer so some patients didn’t have matched standard-of-care images) and Centre for Infectious Disease Control Zambia (CDZIR) (Lusaka, Zambia) which used naked eye inspection and did not employ a standard-of-care device for this study. Pocket Colposcope Generation 1 through Beta and standard-of-care device (if available) were used to collect VIA, green light inspection (GLI), and/or VILI depending on the standard of practice at the clinical site. Gold-standard histopathology (from biopsy or post loop electrosurgical excision procedure (LEEP) specimen or post large loop excision of the transformation zone (LEETZ) specimen) were collected for eligible patients. Overall n=388 subjects have been enrolled from four clinical sites, with n=129 subjects undergoing VIA with 10 blinded expert reviewers, with n=92 subjects undergoing VIA+GLI with 7 blinded expert reviewers, with n=127 subjects undergoing VIA+VILI with 6 blinded expert reviewers, and n=40 subjects undergoing VIA+GLI+VILI with 4 blinded expert reviewers. For the purposes of this analysis we will focus on the Pocket Colposcope versus gold-standard histopathology stratified by the types of contrasts used. The overall accuracy when using the LSIL/CIN1+ vs. normal diagnostic cut-off and comparing to gold-standard histopathology increased consistently with type of contrasts used (VIA only, VIA+GLI, VIA+VILI, and culminating with VIA-GLI-VILI) with overall agreement improving from 53.4-70.1% with sensitivity improving from 42.3-68.1%, with specificity improving from 65.3-73.3%. The diagnostic performance when the diagnostic cut-off was set to HSIL/CIN2+ vs. normal generally followed the prior trend with consistent increases with type of contrast used (VIA only to VIA+GLI+VILI) with rising accuracy 55.9-70.8%, with sensitivity increasing 41.9-52.2%, with specificity improving 78.2-88.0%. Increasing the number of contrast agents used significantly improved the diagnostic performance of the Pocket Colposcope when compared to gold-standard histopathology.

The final aim is to add fluorescent imaging capability to the Pocket Colposcope to provide an additional source of contrast targeting metabolic and/or structural biomarkers that will further improve clinical performance of our system to match gold standard histology pathology and expand the application of the device. We there is broad applicability in other organ sites including: oral cavity, gastrointestinal tract, and skin.

The Beta generation of the Pocket Colposcope was modified for fluorescent imaging by adding excitation LEDs, repurposing of the Generation 3 external LED driver circuit to drive the excitation source, a matched band-pass optical filter for emission, reintroduction of cross-polarization to improve the fluorescent signal to noise, and modular tip that houses the LED ring and optical components without destructive modification of the Pocket Colposcope. A proof of concept device was characterized using a similar set of procedures used to assess the Pocket Colposcope for the 510(k) regulatory approval pathway. Ex-vivo and in-vivo pilot animal studies were conducted to demonstrate successful implementation of the fluorescent imaging capability using a FITC (Fluorescein isothiocyanate) tagged binding ligand (HS-27) with a strong affinity for the heat shock protein-90 (Hsp-90) chaperone molecule (a potential biomarker of cancer). The real time visual tracking of diffusion of ethanol from an ethyl-cellulose gel to surrounding tissue by using solvent properties of ethanol for FITC when compared to water (20 mg per mL vs. 0.1 mg per mL). This ethyl-cellulose gel is being investigated as a potential low cost technique for treating cancer with extended release of ethanol over time to localize treatment. Lastly, the fluorescent Pocket Colposcope was used in a pilot ex-vivo clinical studies in subjects undergoing breast biopsy to evaluate the diagnostic potential of HS-27 when compared to gold-standard histopathology.