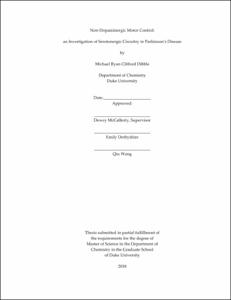 The loss of nigrostriatal dopaminergic neurons is the fundamental hallmark of Parkinson’s disease (PD). In early PD stages, this is ameliorated by dopamine (DA) supplementation; however, as the disease progresses, the complete loss of this key dopaminergic pathway forces the central nervous system to find alternative routes to regain motor control. It has previously been shown that serotonergic routes must take on the role of the failed dopaminergic system throughout the progression of the disease. Previously studied 5-HT1A anxiolytic and anti-depressive therapeutics have yet to be successfully repurposed for Parkinson’s disease patients. Herein is described the current efforts towards the employment non-dopaminergic agonists in the investigation of motor control in Parkinson’s disease. This research outlines the development of non-dopaminergic therapeutics inspired by the core structure of the clinically approved 5-HT1A agonist Befiradol. This motif has been infused with a trans-2-arylcyclopropylamine moiety which has been independently shown to reduce motor symptoms in Parkinson’s disease via a prior collaboration from the McCafferty lab. While it was originally hypothesized that these therapeutics would act as bifunctional agonists at the 5-HT1A and M4 GPCRs, affinity assays reveal dualistic agonism at the 5-HT1A and 1 receptors, offering a new class of potential bifunctional therapeutics.