Actions and Receptions of the Knights Templar from 1118-1192 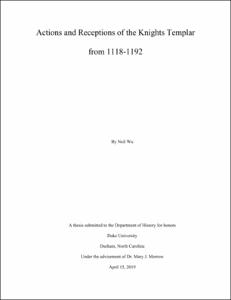 View / Download
844.7 Kb
Date
Author
Wu, Neil
Advisor
Morrow, Mary J.
Repository Usage Stats
168
views
288
downloads
Abstract
In 1118, a quasi-monastic military order known as the Knights Templar was founded in the crusader kingdom of Jerusalem. Church leaders saw this organization as an opportunity to inspire the religiosity of the crusading movement. In 1129, their aspirations were expressed through the Latin Rule of the Knights Templar, a document that regulated the Templars’ conduct. The Latin Rule’s rigid guidelines prescribed a lifestyle that combined elements of monasticism and knighthood. However, the Templars were quick to form their own interpretations of purpose. Rather than living under strict adherence to the original mandates of the Latin Rule, what resulted was an organization that excelled in battle and utilized its military abilities to pursue their own financial and political agendas in the Holy Land. Many contemporaries took note of the Templars’ choice of actions and of their apparent priorities. The contemporary reception was organized into two different camps. The first camp believed that the Templars served a necessary purpose in military matters, despite recognition that the order had harnessed a considerable amount of economic resources and political influence along the way. The other camp maintained a narrative in which the Knights Templar had grown greedy and corrupted, and that due to this degradation, they had outgrown their usefulness.
Type
Honors thesis
Department
History
Subject
Crusades
Knights Templar
Templars
Military Orders
Crusader States
Permalink
https://hdl.handle.net/10161/18329
Citation
Wu, Neil (2019). Actions and Receptions of the Knights Templar from 1118-1192. Honors thesis, Duke University. Retrieved from https://hdl.handle.net/10161/18329.
Collections
More Info
Show full item record