Friend or Foe? Empathy Across Demographics and Children's Perceptions of In-group and Out-group Members 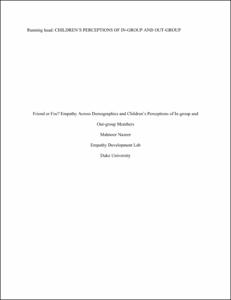 View / Download
225.9 Kb
Date
Author
Nazeer, Mahnoor
Advisor
Svetlova, Rita
Repository Usage Stats
153
views
17
downloads
Abstract
Preschool children often operate under the lens of essentialist thought- forming in-group and out-group attitudes, assigning common characteristics to members of a group, and evaluating in-group members more positively than out-group members (Gelman, 2004; Dunham, 2018). The current study explored whether presenting groups in particular ways and helping children connect to characters on a personal level could influence children’s group attitudes. Preschool children (N = 88, age range = 3.08 to 6.97 years, 53% girls) were introduced to paper characters, some of whom belonged to the same arbitrary group as the child (in-group) and some who belonged to a different group (out-group). The study employed a two-by-two factorial design; In one between-subjects manipulation, children either did not receive any information about characters (Baseline condition), or were told that some characters across groups shared their characteristics and preferences (Similarity condition). In another between-subjects manipulation, the two groups were presented either in a competitive context (Competition condition), or in a neutral context (No-competition condition). After assessing children’s attitudes toward both in-group and out-group characters in a series of measures, we found differential effects of similarity and competition. Children in the Similarity condition were significantly more likely to choose out-group individuals over in-group individuals than children in the Baseline condition. Additionally, children in the No-competition condition were more likely to share resources with the out-group than children in the Competition condition. These results demonstrate the role of context and personal experience in the formation of children’s group attitudes and suggest that finding commonalities with individual group members can override group bias.
Type
Honors thesis
Department
Psychology and Neuroscience
Subject
empathy
essentialism
group bias
in-group
out-group
competition
Permalink
https://hdl.handle.net/10161/18351
Citation
Nazeer, Mahnoor (2019). Friend or Foe? Empathy Across Demographics and Children's Perceptions of In-group and Out-group Members. Honors thesis, Duke University. Retrieved from https://hdl.handle.net/10161/18351.
Collections
More Info
Show full item record