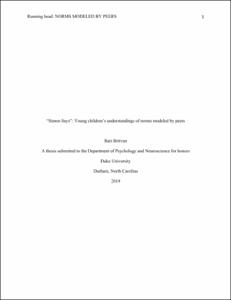 View / Download
740.7 Kb
Date
Author
Britvan, Bari
Advisors
Michael, Tomasello
Li, Leon
Repository Usage Stats
69
views
32
downloads
Abstract
Social norms are mutually agreed upon standards of behavior that are expected among group members and guide essentially all aspects of human social behavior. Previous theory has suggested that children undergo a two-step sequence in normative development. First, children below age 3 have a dyadic, sympathetic orientation towards others. Then, at around age 3, children are believed to transition into a group-level, norm-based orientation. At this second stage, children interpret norms as group-level expectations (rather than solely as individual directives) and develop the ability to follow and enforce social norms. However, this two-step sequence in normative development was hypothesized based on the results of many studies but has not yet been directly tested. The current study addresses this gap by using preferences as a control to norms since both have a world-to-mind direction of fit (i.e., they both convey a desire for a certain state of the world) and therefore should appear the same to children who lack awareness of the difference in generalizability. Furthermore, we investigated whether children would prioritize complying with norms over complying with preferences when they are modeled by similar-age peers to further reveal whether children at the age of three begin to respect norms as such, rather than as commands given by adult authority figures. Among three-and-a-half-year-olds, we found that most children either did not conform to anything or conformed to everything, but among those that favored a testimony type, significantly more complied with norms than complied with preferences.
Type
Honors thesis
Department
Psychology and Neuroscience
Permalink
https://hdl.handle.net/10161/18399
Citation
Britvan, Bari (2019). “Simon Says”: Young children’s understandings of norms modeled by peers. Honors thesis, Duke University. Retrieved from https://hdl.handle.net/10161/18399.
Collections
More Info
Show full item record