An information-theoretic analysis of spike processing in a neuroprosthetic model 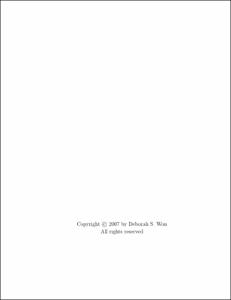 View / Download
2.0 Mb
Date
Author
Won, Deborah S.
Advisors
Wolf, Patrick D.
Henriquez, Craig
Nolte, Loren
Tiesinga, Paul
Turner, Dennis A.
Repository Usage Stats
272
views
645
downloads
Abstract
Neural prostheses are being developed to provide motor capabilities to patients who suffer from motor-debilitating diseases and conditions. These brain-computer interfaces (BCI) will be controlled by activity from the brain and bypass damaged parts of the spinal cord or peripheral nervous system to re-establish volitional control of motor output. Spike sorting is a technologically expensive component of the signal processing chain required to interpret population spike activity acquired in a BCI. No systematic analysis of the need for spike sorting has been carried out and little is known about the effects of spike sorting error on the ability of a BCI to decode intended motor commands. We developed a theoretical framework and a modelling environment to examine the effects of spike processing on the information available to a BCI decoder. Shannon information theory was applied to simulated neural data. Results demonstrated that reported amounts of spike sorting error reduce mutual information (MI) significantly in single-unit spike trains. These results prompted investigation into how much information is available in a cluster of pooled signals. Indirect information analysis revealed the conditions under which pooled multi-unit signals can maintain the MI that is available in the corresponding sorted signals and how the information loss grows with dissimilarity of MI among the pooled responses. To reveal the differences in non-sorted spike activity within the context of a BCI, we simulated responses of 4 neurons with the commonly observed and exploited cosine-tuning property and with varying levels of sorting error. Tolerances of angular tuning differences and spike sorting error were given for MI loss due to pooling under various conditions, such as cases of inter- and/or intra-electrode differences and combinations of various mean firing rates and tuning depths. These analyses revealed the degree to which mutual information loss due to pooling spike activity depended upon differences in tuning between pooled neurons and the amount of spike error introduced by sorting. The theoretical framework and computational tools presented in this dissertation will BCI system designers to make decisions with an understanding of the tradeoffs between a system with and without spike sorting.
Type
Dissertation
Department
Biomedical Engineering
Subject
Spike sorting
Information theory
BCI
Body Mass Index (BMI)
Neural prosthesis
Permalink
https://hdl.handle.net/10161/184
Citation
Won, Deborah S. (2007). An information-theoretic analysis of spike processing in a neuroprosthetic model. Dissertation, Duke University. Retrieved from https://hdl.handle.net/10161/184.
Collections
More Info
Show full item record