"The Breakfast Problem": A Comparative Dispute between a Classical Confucian and a Feminist Liberal on Priority of Virtues 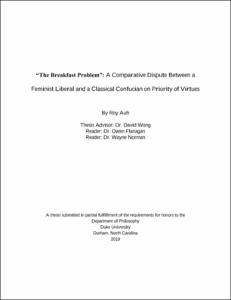 View / Download
451.8 Kb
Date
Author
Auh, Roy
Advisor
Wong, David
Repository Usage Stats
433
views
182
downloads
Abstract
A classical Confucian and a feminist liberal married to each other find themselves at a stalemate when they disagree on a breakfast routine for their six-years-old daughter. The Confucian Carl espouses a routine is characterized by filial deference in the name of engendering xiao (孝), or filial piety – the properly affectionate and respectful attitude and conduct the children should have and perform towards their parents. Liberal Libby instead argues for a breakfast routine that targets the growth of May’s autonomy competency – she follows Diana Meyer’s conception of autonomy, which is described as a competency in a repertory of skills that allows one to assess one’s constellation of values, beliefs, desires, principles, and ends, and act most according to its integration, or one’s integrated sense of self. They believe that the practice of each other’s advocated virtues hinder the growth of their own projects, and so a philosophical argument proceeds. They resolve their argument by recognizing the various mistakes they had in their responses to each other during this cross-cultural argument. They then realized that there are substantive areas of agreement between the two positions, but which are different enough so that they can be of use for each other to construct a more comprehensive ethical life.
Type
Honors thesis
Department
Philosophy
Subject
filial piety
autonomy
morality
pluralism
comparative philosophy
ethical disputes
Permalink
https://hdl.handle.net/10161/18407
Citation
Auh, Roy (2019). "The Breakfast Problem": A Comparative Dispute between a Classical Confucian and a Feminist Liberal on Priority of Virtues. Honors thesis, Duke University. Retrieved from https://hdl.handle.net/10161/18407.
Collections
More Info
Show full item record