Modeling the Economics of Offshore Wind in the Southeastern United States 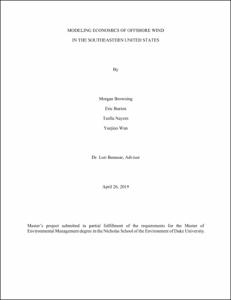 View / Download
9.0 Mb
Date
Authors
Nayem, Tasfia
Browning, Morgan
Burton, Eric
Wan, Yuejiao
Advisor
Bennear, Lori
Repository Usage Stats
613
views
494
downloads
Abstract
This study analyzes the future deployment of offshore wind in the southeastern U.S. states of North Carolina, South Carolina, and Virginia. There has been a flurry of recent activity surrounding this topic. State governments have shown interest in developing policy to attract offshore wind to their shores, and an offshore wind developer has already purchased the rights to build a farm off the coast of North Carolina. At the early stages of a potentially significant trend like this, it is important to examine what could occur under different scenarios. Our research aims to inform the conversation on offshore wind by addressing three main sets of questions on the future of offshore wind in the southeastern U.S.: 1. What is the landscape of offshore wind in the U.S.? 2. How much offshore wind will be developed in the Southeast in the coming decades? What policies could have the greatest impact? 3. What is public opinion on offshore wind in the Southeast? To perform each of our three analyses, we employed literature and policy reviews, energy forecasting and modeling, and expert interviews and survey reviews, respectively. Our exploration of the first question revealed that state-level policy-makers, particularly in the northeast, are aggressively pursuing and considering policies to accelerate offshore wind deployment in their states. In the Southeast, Virginia is leading the charge, driven by the green jobs potential associated with the offshore wind. State leaders in Virginia are convening task forces to explore manufacturing potential; incorporating offshore wind into its renewable energy portfolio goals; and demonstrating the potential of the industry with the first offshore wind initiative in the mid-Atlantic. To address our second set of questions, we conducted an energy analysis using the AURORA modeling software over a study period of 2018–2040. Various policy scenarios were modeled, including multiple carbon prices and an offshore mandate. In addition, we coupled each policy scenario with both high-cost and low-cost price scenarios for offshore wind technology. Model results reveal two key conclusions. The first is that the cost of offshore wind technology will be crucial in determining the level of deployment. Model runs at the higher cost scenario did not show any offshore capacity unless the model was forced to build it with a mandate. Of the selected policy scenarios, the offshore mandate was the most effective. With high costs, it was the only modeled scenario in which any capacity was added, and under low costs, it produced the highest level of capacity of any scenario. A separate stakeholder analysis was performed to address our third research question. We examined how different groups in the region may react to and impact offshore wind deployment. As the scale of the offshore wind expands in the future in U.S., there is an emerging trend that more opposition will come from minority groups such as local commercial fishermen. However, overall, the majority of the general public supports offshore wind development. In summary, our analysis finds that costs and policy options should not be considered in isolation. The development cost for offshore wind is the key factor in determining whether capacity is built; therefore, it is imperative that offshore wind policies specifically aim to lower the upfront capital investments required. Additional consideration must be given to stakeholder concerns. The termination of previously approved wind farms, due in part to public opinion, have demonstrated the importance of stakeholder management. Communication with interested parties must begin early in the development process and should be supported with objective evaluation and monitoring of existing projects.
Type
Master's project
Department
Nicholas School of the Environment and Earth Sciences
Subject
offshore wind
economics
energy modeling
public opinion
carbon pricing
climate policy
Permalink
https://hdl.handle.net/10161/18454
Citation
Nayem, Tasfia; Browning, Morgan; Burton, Eric; & Wan, Yuejiao (2019). Modeling the Economics of Offshore Wind in the Southeastern United States. Master's project, Duke University. Retrieved from https://hdl.handle.net/10161/18454.
Collections
More Info
Show full item record