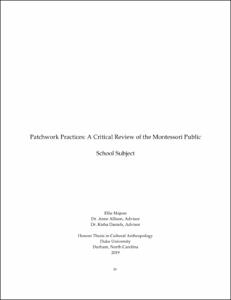 View / Download
457.6 Kb
Date
Author
Majure, Ellie
Advisors
Allison, Anne
Daniels, Kisha
Repository Usage Stats
112
views
109
downloads
Abstract
In the wake of late twentieth century educational reforms like No Child Left Behind and the Every Student Succeeds Act, American public schools have become increasingly subjected to standardized accountability testing, which has made student success on standardized tests the primary criterion of federal funding for struggling schools. Billed as an equalizer of academic achievement, these standardizing measures have both overseen increasing “inequality” as well as deterioration in the breadth of educational curriculum as teachers are incentivized to "teach to the test." This thesis is a critical analysis of the Montessori method within this flattened, test-focused environment. Through an analysis of educational reform in the market-driven, neoliberal moment; a comparison between the educational philosophies of John Dewey, Paulo Freire, Maria Montessori, and Thomas Jefferson; and a compilation of fictive ethnography, I explore the tensions that arise within a public Montessori environment. I show how the public school system limits and constrains the Montessori method, and how the subject of Montessori is seemingly at odds with the public school subject. I argue that if the Montessori method is updated with pieces of Dewey’s and Freire’s philosophies and practices, we can create a public setting of high performing learners who can also think critically.
Type
Honors thesis
Department
Cultural Anthropology
Subject
Montessori
Critical Pedagogy
Neoliberal
Subject
Education
Public Schools
Permalink
https://hdl.handle.net/10161/18481
Citation
Majure, Ellie (2019). Patchwork Practices: A Critical Review of the Montessori Public School Subject. Honors thesis, Duke University. Retrieved from https://hdl.handle.net/10161/18481.
Collections
More Info
Show full item record