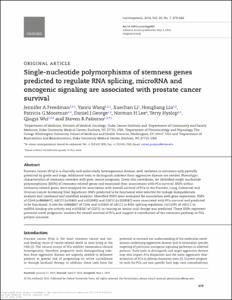 Professor in Population Health Sciences
Qingyi Wei, MD, PhD, Professor in the Department of Medicine, is Associate Director for Cancer Control and Population Sciences, Co-leader of CCPS and Co-leader of Epidemiology and Population Genomics (Focus Area 1). He is a professor of Medicine and an internationally recognized epidemiologist focused on the molecular and genetic epidemiology of head and neck cancers, lung cancer, and melanoma. His research focuses on biomarkers and genetic determinants for the DNA repair deficient phenotype and
More Authors
Alphabetical list of authors with Scholars@Duke profiles.