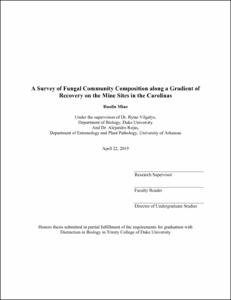 View / Download
14.2 Mb
Date
Author
Miao, Ruolin
Advisor
Vilgalys, Rytas
Repository Usage Stats
120
views
30
downloads
Abstract
In the era of Anthropocene, an increasing part of the terrestrial environments is losing their ecosystem services and function, negatively affecting both human economics and the ecological system. Phytoremediation, the use of plants to reverse degradation and to restore ecological function, has been a promising approach. However, the symbiotic soil microbiota that influence the effectiveness of this method is not fully understood. I sampled the soil and roots of Pinus spp. (pines) at four sites along a gradient of vegetation recovery on the Superfund Site Brewer Gold Mine (SC), the Henry Knob Mine (SC), and Russell Gold Mine. The acidity, nutrient profile and heavy-metal contamination of collected soil is determined. DNA is extracted from the soil and root samples with PowerSoil DNA Isolation Kit, followed by preparation of multiplex PCR samples of the ITS region. Sequence reads generated through Illumina Miseq is processed through QIIME pipeline and taxonomy assigned through UNITE database. The results show a pattern of succession in fungal communities along a recovery gradient. While the mycorrhizal fungi on the least recovered site are dominated by Rhizopogon sp. and Pisolithus sp., sites with more recovered vegetation reveal a more diverse array of symbiotic fungi, including Amanita sp. and Russula sp.. These diverse fungi, although came later in the succession pattern, likely brings more diverse benefits to help their hosts cope with the stressful environment. This “bioprospecting” method could be applied to extract and amplify symbiotic fungi to facilitate revegetation efforts.
Type
Honors thesis
Department
Biology
Subject
mycorrhizal fungi
mine
fungal community
next-gen sequencing
remediation
restoration
Permalink
https://hdl.handle.net/10161/18540
Citation
Miao, Ruolin (2019). A Survey of Fungal Community Composition along a Gradient of Recovery on the Mine Sites in the Carolinas. Honors thesis, Duke University. Retrieved from https://hdl.handle.net/10161/18540.
Collections
More Info
Show full item record