Intercellular Signaling Pathways in the Initiation of Mammalian Forebrain Development 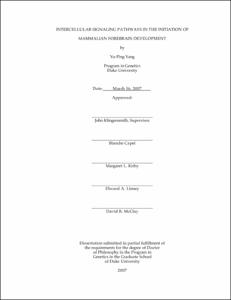 View / Download
15.2 Mb
Date
Author
Yang, Yu-Ping
Advisors
Klingensmith, John
Capel, Blanche
Kirby, Margaret L.
Linney, Elwood A.
McClay, David R.
Repository Usage Stats
418
views
196
downloads
Abstract
The Spemann organizer in amphibians gives rise to the anterior mesendoderm (AME) and is capable of inducing neural tissues. This inductive activity is thought to occur largely via the antagonism of Bone Morphogenetic Protein (BMP) signaling in the organizer. In the mouse, BMP antagonists Chordin and Noggin function redundantly in the AME and are required during forebrain maintenance. However, the timing of forebrain initiation and the function of BMP antagonism in forebrain initiation remained unclear prior to this study. In addition, the Transforming Growth Factor β (TGFβ) ligand Nodal patterns the forebrain via its function in the anterior primitive streak (APS), the precursor tissue of the AME. Whether BMP and Nodal signaling pathways interact has not been previously investigated. The goal of this dissertation was to investigate the cellular and molecular mechanisms involved in early mammalian forebrain establishment by embryonic and genetic manipulations. This study determined that forebrain initiation occurs during early gastrulation and requires signals from the AVE and AME. The AVE was identified as a source of active BMP antagonism in vivo, and the BMP antagonism supplied by exogenous tissues was capable to promote forebrain initiation and maintenance in the murine ectoderm. It is likely that BMP antagonism enhances forebrain gene expression via inhibiting posteriorization. This study further identified a possible crosstalk between BMP and Nodal signaling. Loss of Chordin or Noggin in combination with heterozygosity for Nodal or Smad3 results in holoprosencephaly. Molecular analyses suggest that the BMP-Nodal interaction occurs in the APS and/or the AME. Failure of this interaction results in an imbalance of BMP and Nodal signal levels that devastate APS and AME patterning during early forebrain establishment, ultimately leading to holoprosencephaly in mid-gestation. This interaction is likely to occur extracellularly, possibly by formation of a BMP-Nodal heteromeric complex. Furthermore, the spatiotemporal expression of phospho-Smad1/5/8, an effector of BMP signaling pathway, was characterized during early mouse embryogenesis. Distribution of phospho-Smad1/5/8 serves as a faithful readout of BMP signaling activity and helps to better understand how BMPs are involved in patterning early embryos. The implication of phospho-Smad1/5/8 expression in both wildtype and mutant embryos is also discussed.
Type
Dissertation
Department
Genetics
Subject
amphibians
anterior mesendoderm (AME)
Bone Morphogenetic Protein (BMP)
embryos
mammals
forebrain
Permalink
https://hdl.handle.net/10161/186
Citation
Yang, Yu-Ping (2007). Intercellular Signaling Pathways in the Initiation of Mammalian Forebrain Development. Dissertation, Duke University. Retrieved from https://hdl.handle.net/10161/186.
Collections
More Info
Show full item record