The Exclusion of Conservative Women from Feminism: A Case Study on Marine Le Pen of the National Rally 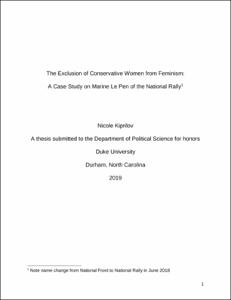 View / Download
633.2 Kb
Date
Author
Kiprilov, Nicole
Advisor
Munger, Michael
Repository Usage Stats
501
views
642
downloads
Abstract
There is a lack of civil discourse and collaboration among women of different feminist identities in the United States and abroad. This is somewhat puzzling, especially because historically, feminism has never really assumed a definitive identity. It has been molded and shaped not only by political movements and interpretations of them, but also by women’s subjective and highly personal experiences. This lack of civil discourse in the feminist arena has excluded women who identify with traditional first or second-wave feminism. What has become a somewhat radical idea is that women who do not favor modern-day, progressive, left-wing, fourth-wave feminism, the wave that the majority of American society is currently in, may still actually favor improving the lives of women. The advocacy of women’s rights on the basis of gender equality is at the core of feminism, although not entirely explicatory of feminism, regardless of what iteration of it is in practice. It is, therefore, not irrational to claim that advocacy of women’s lives may come in different forms, which leads to the idea that it may perhaps still be worth listening to women who identify as traditional feminists. Thus, an important conversation must be started in the academic community about the demonization of the right-wing when it comes to women’s issues. In this thesis, I identify a gap in the academic community: the lack of academic literature connecting right-wing politics and women’s rights issues via a neutral, academic lens. Through a case study on Marine Le Pen, I contend that the phenomenon of Marine Le Pen – her rise to power, her shifting of the National Rally rhetoric on women’s issues from the time of her father’s leadership to her current leadership as part of her rebranding campaign, her stances on women’s issues and how they fit into a more conservative feminist framework, and the resulting support she has received from the female electorate in France – may be an indication that conservative women have been excluded from feminism. This serves as an academic attempt and initial step to mitigate the demonization of conservative feminist tenets.
Type
Honors thesis
Department
Political Science
Subject
Marine Le Pen
Feminism
Conservative Feminism
National Rally
Permalink
https://hdl.handle.net/10161/18632
Citation
Kiprilov, Nicole (2019). The Exclusion of Conservative Women from Feminism: A Case Study on Marine Le Pen of the National Rally. Honors thesis, Duke University. Retrieved from https://hdl.handle.net/10161/18632.
Collections
More Info
Show full item record