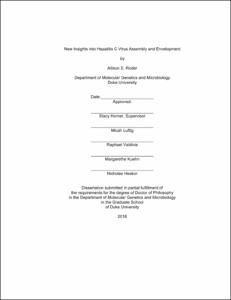 Hepatitis C virus assembly and envelopment are coordinated by a complex network of protein-protein interactions that encompasses most of the viral structural and nonstructural proteins. However, the details surrounding how these proteins function during the late stages of the viral lifecycle remain unclear. Here, we define new mechanisms for three viral proteins, p7, NS5B and NS4A, in viral assembly and envelopment.

First, we characterized a culture adapted genotype 2A, JFH-1, strain of HCV that showed a 2-log increase in viral titer after more than 30 passages in cell culture. Sequencing of the adapted virus revealed 8 synonymous and 9 nonsynonymous amino acid changes. We found that two of these mutations, in the p7 and NS5B proteins, together, were sufficient to recapitulate the increase in viral infectivity seen in the fully adapted virus, without increasing intracellular RNA levels. The two mutations were found to promote an increase in cellular lipid droplet size and circularity and ultimately lead to a decrease in sphingomyelin content of infectious virions. These data suggest a genetic interaction between the p7 and NS5B proteins that enhances viral particle production and increases viral specific infectivity.

In the second study presented in this dissertation, site-directed mutagenesis of the C-terminal acidic domain of the viral NS4A protein was used to investigate its function. We found that mutation of several of these amino acids prevented the formation of the viral envelope, and therefore the production of infectious virions, without affecting viral RNA replication. In an overexpression system, we found that NS4A interacted with several viral proteins known to coordinate envelopment, including the viral E1 glycoprotein. One of the NS4A C-terminal mutations, Y45F, disrupted the interaction of NS4A with E1. Specifically, NS4A interacted with the first hydrophobic region of E1, a region previously described as regulating viral particle production. Supernatants from HCV NS4A Y45F transfected cells had significantly reduced levels of HCV RNA, however they contained equivalent levels of Core protein. Interestingly, the Core protein secreted from these cells formed high order oligomers with a density matching the infectious virus secreted from WT cells. These results suggest that this Y45F mutation in NS4A causes secretion of low density Core particles devoid of genomic HCV RNA. These results corroborate previous findings showing that mutation of the first hydrophobic region of E1 also causes secretion of Core complexes lacking RNA, and therefore suggest that the interaction between NS4A and E1 is involved in the incorporation of viral RNA into infectious HCV particles. Our findings define a new role for NS4A in the HCV lifecycle and help elucidate the protein interactions necessary for production of infectious virus.