Lumpen: Vagrancies of a Concept from Marx to Fanon (and on) 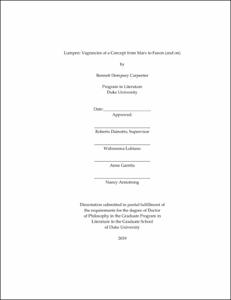 This dissertation, Lumpen: Vagrancies of a Concept from Marx to Fanon (and on), tracks the concept of the lumpenproletariat from its coinage by Karl Marx through its reworking by Franz Fanon, the Black Panthers and others in the context of the colonial liberation and Black Power movements, and onwards into contemporary debates about populism, identity, politics, and the end of work. From its origins an unstable concept, the lumpenproletariat raises a series of interrelated questions about the relation of class to interest, interest to identity, and identity to politics. Succinctly, the dissertation asks: what happens to the Marxian project when the future of productive labor seems in doubt, both as a source of capital valorization and as a foundation for political action?

Contemporary engagement with the category of the lumpenproletariat has typically focused on the latter as a symbol of the irreducible autonomy of the political, ignoring the concept’s empirical referent. Separately, a growing body of literature has grappled with the increase of economically redundant surplus populations produced, in part, by technological automation, a phenomenon obliquely reflected in recent philosophical fascination with, for instance, bare life, necropolitics and the abject. Such work has however rarely considered the political ramifications of such transformations. What we would need, then, is a theoretical framework capable of grasping both aspects of this twofold problematic—the determinacy of dispossession, the indeterminacy of its political expression.

The beginnings of such a framework can be found, I argue, in the writings on the lumpenproletariat in the work of Frantz Fanon, James Boggs, and the Black Panthers. Developing their scattered insights, I argue that the lumpenproletariat names both the tendential production of an economically redundant surplus population and the lack of any automatic correlation between this (or any) social condition and political subjectivation. This gap between economic and political, structure and subject, becomes then the space for the creative articulation of a collective subject as a properly political project. This is precisely the task of a socialist politics today.

Whether in terms of its objective position at the point of production or its subjective consciousness of the need for revolution, the decline of the industrial proletariat has often been figured as synonymous with that of socialist politics. In contrast, my dissertation suggestions that a recuperation of the rich and half-forgotten legacy of the lumpenproletariat emerging out of the Black radical tradition can help provide a model for constructing a powerful socialist movement in the present.