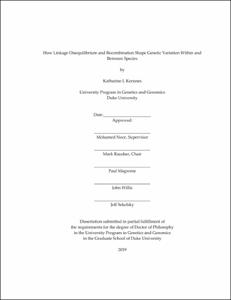 Meiotic recombination creates genetic diversity by shuffling combinations of alleles across loci, yet alleles at neighboring loci often remain non-randomly associated. This non-random association is known as linkage-disequilibrium (LD), and it has evolutionarily important effects both within and between species. Nucleotide diversity at a given locus may be reduced by directional selection on the locus, or by selection on neighboring linked loci. Recombination rates and nucleotide diversity are positively correlated across loci within many species, which can be explained by linked selection reducing nucleotide variation disproportionately in regions of low recombination. However, the independent contributions of different types of linked selection are difficult to disentangle. Between species, chromosomal inversions have been proposed to suppress recombination in hybrid inversion heterozygotes and thereby maintain LD and species distinction, but many models of how this happens are overly simplistic—they often ignore non-crossover gene conversion, which reduces LD. Little direct empirical data exist on gene conversion with respect to inversions in hybrids, so despite existing models, inversions may be quite ineffective at keeping hybridizing species distinct. Here, I examine the evolutionary consequences of LD at two levels: nucleotide diversity within species, and recombination-suppression in hybrids between species. I present three investigations driven by this overarching goal of understanding how LD plays into fundamental evolutionary mechanisms. First, I examine nucleotide variation in Drosophila pseudoobscura, and I present a novel test for evidence that particular kinds of selection at linked sites (background selection and/or soft sweeps) may reduce nucleotide variation even in the absence of hard selective sweeps. Second, I show that inversions are permeable to non-crossover gene conversion, which occurs throughout inverted regions in intra- and inter-specific hybrids. I provide a genome-wide empirical analysis of gene conversion rates both within species and in species hybrids, and I estimate that gene conversion occurs at a rate of 1 x 10-5 to 2.5 x 10-5 converted sites per bp per generation in experimental crosses within D. pseudoobscura and between D. pseudoobscura and its naturally-hybridizing sister species D. persimilis. Finally, I use extensive whole-genome sequence data to re-examine patterns of introgression and divergence in the D. pseudoobscura / D. persimilis system. I show how failing to consider variation in evolutionary rate can lead and has led to misinterpretations regarding effects of introgression. Through these genomic examinations, I refine our understanding of how recombination and linkage disequilibrium have shaped the divergence and speciation of Drosophila pseudoobscura and D. persimilis.