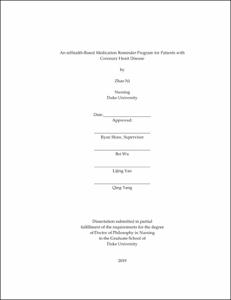 Coronary heart disease (CHD) is the second leading cause of death in China. The treatment of CHD typically involves long-term pharmaceutical therapy. For patients with CHD, cardio-protective medications can prevent the enlargement of harmful clots, cardiovascular symptoms, and poor therapeutic outcomes such as uncontrolled high blood pressure, hyperlipidemia, arrhythmia, heart failure, and sudden cardiac death. However, in China, poor adherence to cardio-protective medications has been cited as a public health concern. This poor adherence to cardio-protective medications has been linked to increases in healthcare costs due to poor therapeutic outcomes typically requiring major medical interventions, such as coronary angioplasty and coronary artery bypass grafting.

In China, local primary healthcare clinics are often not the first choice for treatment. Instead, patients with serious illnesses such as CHD prefer to utilize hospitals. Consequently, many of the 100 million people diagnosed with CHD in China receive prescriptions and medication-related knowledge in hospitals only without a primary care clinician to monitor their treatment. Under this healthcare utilization model, patients are often not provided with proper treatment maintenance and knowledge regarding their medication-taking behaviors. This lack of follow-up care decreases patients’ awareness of the importance of taking medications the way they were prescribed.

Mobile health, known as mHealth, is the use of portable electronic devices with software applications to provide healthcare services and manage patient information. China has 1.3 billion mobile phone users, and 97% of Chinese netizens access the Internet by using a mobile phone. These conditions in China are ideal for implementing an mHealth intervention to improve health and practice. The purpose of this study is to develop an mHealth intervention to improve medication adherence among patients with CHD.

First, a pilot study with two phases was conducted in the Cardiology Department of West China Hospital, located in Chengdu, China. Phase I was conducted to inform the development of an mHealth intervention by integrating two mobile applications. The content of reminders and educational materials, the frequency and timing of the intervention were developed in this phase. Based on Phase I, the mHealth intervention was refined and an exploratory randomized controlled trial was conducted in Phase II to evaluate the feasibility and acceptability of using mHealth as a tool to assist CHD patients to take their cardio-protective medications. The cohorts of participants in the two phases were mutually exclusive. Next, a larger scale study with 196 participants was conducted to assess if the mHealth intervention could improve medication adherence and relevant health outcomes (systolic blood pressure, diastolic blood pressure, and heart rate) among patients with CHD in comparison to a control group that receives general educational materials over a period of 60 days.