Death and the Construction of an Astrocyte Network 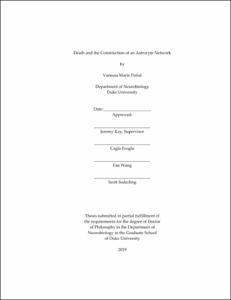 Naturally-occurring cell death is a fundamental developmental mechanism for regulating cell numbers and sculpting developing organs. This is particularly true in the central nervous system, where large numbers of neurons and oligodendrocytes are eliminated via apoptosis during normal development. Given the profound impact of death upon these two major cell populations, it is surprising that developmental death of another major cell type – the astrocyte – has rarely been studied. It is presently unclear whether astrocytes are subject to significant amounts of developmental death, or how it occurs. Here we address these questions using mouse retinal astrocytes as our model system. We show that the total number of retinal astrocytes declines by over 3-fold during a death period spanning postnatal days 5-14. Surprisingly, these astrocytes do not die by apoptosis, the canonical mechanism underlying the vast majority of developmental cell death. Instead, we find that microglia kill and engulf astrocytes to mediate their developmental removal. Genetic ablation of microglia inhibits astrocyte death, leading to a larger astrocyte population size at the end of the death period. However, astrocyte death is not completely blocked in the absence of microglia, apparently due to the ability of astrocytes to engulf each other. Nevertheless, mice lacking microglia showed significant anatomical changes to the retinal astrocyte network, with functional consequences for the astrocyte-associated vasculature leading to retinal hemorrhage. These results establish a novel modality for naturally-occurring cell death, and demonstrate its importance for formation and integrity of the retinal gliovascular network.