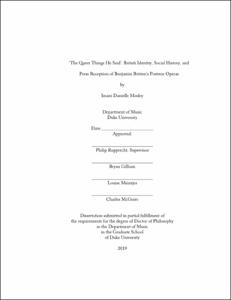 Lee Edelman notes that “queerness can never define an identity; it can only ever disturb one.” This statement reinforces a particular view of queerness: one that suggests that it is, first and foremost, an action, and secondly, that it is an action that is meant to challenge already existing structures. And while the act of disruption itself is not always queer, queering-as-action emphasizes the destabilization of entrenched ideas, norms, and binaries.

My dissertation examines the music, productions, and subsequent reception of four operas by Britten at the time of their premieres — Billy Budd (1951), Gloriana (1953), A Midsummer Night’s Dream (1960), and Owen Wingrave (1971) — focusing on how these operas each present various ways of queering and forms of queer disruption. On a musical level, these works subvert a largely nineteenth-century heteronormative model of opera that dictated voice types within certain roles, the power and relationship dynamic between male and female characters, and portrayals and performances of gender. On a social level, these four operas tell stories that engage with and disrupt ideas of wartime-era constructions of nation and empire at a time when the desire to depict British strength and relevance competed with the rise of new global superpowers.

Britten’s operas fit within a timeline that runs alongside the postwar era in Britain. In a period shaped by World War II and its aftermath, postwar Britain encapsulated significant political and cultural shifts that includes the dissolution of the British Empire, student and youth protest movements, and the decriminalization of homosexuality. How these works were reviewed and discussed by critics as well as citizens will show how these operas (and their disruptions) relate to, reinforce, and reject these social shifts. Through the perusal of press reviews and archival materials, I explain how these disturbances are realized by those experiencing these operas at the moment of their premieres. These primary sources also reveal how Britten’s postwar operas run counter to and engage with large cultural and societal changes in postwar Britain.