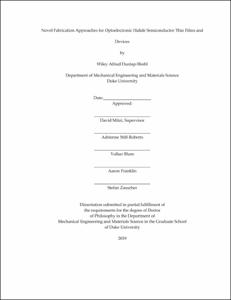 Halide semiconductors have recently emerged as a class of materials that unite outstanding optoelectronic properties with the ability to process device-quality thin films at low or even room temperature. Successful adoption of halide semiconductor-based technologies will, however, be contingent on the development of device architectures and film processing approaches that enable efficient, low-cost devices with stable performance and rigorous study of these materials’ photophysical properties. Herein, the goals are twofold: first, to develop low-cost device processing methods that deliver efficient solar cell performance while managing sources of instability; second, to extend existing thin film processing techniques to novel materials, enabling investigation of their optoelectronic properties.

Chapter 4 focuses on the second device challenge—i.e., managing instability—by developing inherently robust architectures via lamination and hot pressing. This technique circumvents the intrinsic thermal instability of perovskite thin films during processing and forms a self-encapsulating device architecture. Annealing MAPbI3 films under pressure in a specially-constructed tool allows significant grain growth at temperatures that would ordinarily decompose them rapidly to PbI2. However, these temperatures can also activate unexpected reactions with carrier transport materials previously thought to be inert, such as nickel oxide. Applying this knowledge, techniques are developed that avoid reactivity-related problems and recover the targeted solar cell performance.

Chapters 5 and 6 of this dissertation focus on developing deposition methods for new halide semiconductor films, with emphasis in this case on exploration of fundamental physical properties rather than device fabrication. In Chapter 5, resonant infrared matrix-assisted pulsed laser evaporation (RIR-MAPLE) is first used to deposit films of the archetypal halide perovskite CH3NH3PbI3, which possesses properties comparable to those prepared by more conventional methods such as spin coating, as determined by XRD, electron microscopy and optical spectroscopy. CH3NH3PbI3 solar cells fabricated using RIR-MAPLE reach power conversion efficiency of over 12%. RIR-MAPLE is then extended to the deposition of layered lead halide perovskite films incorporating oligothiophene-derived molecular cations, which cannot be controllably deposited by other methods. By varying the number of rings in the thiophene chain and the halide component of the inorganic layers, the photoluminescence emission from these films can be tuned to originate from either the inorganic or the organic component or be quenched altogether, supporting prior computational predictions of the tunable quantum well nature of these types of perovskite structures. Carrier transfer between the inorganic and organic moieties can synergistically populate triplet states in the organic, showcasing the unique physical properties attainable in complex-organic perovskites.

Chapter 6 focuses on the halide semiconductor indium(I) iodide, which possesses elements of its electronic structure like those of halide perovskites, that are often invoked as an explanation for these materials’ remarkable defect tolerance. Indium(I) iodide is prepared in thin-film form by thermal evaporation. A photovoltaic effect is demonstrated for the first time in this material, with solar cells demonstrating ~0.4% power conversion efficiency. Overall, the results advance our scientific understanding of halide semiconductors, and provide crucial pathways by which they can be made more technologically effective, and be studied in greater depth.