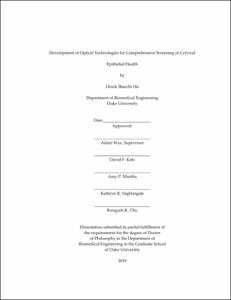 Cervical cancer is one of the most common gynecologic malignancies with significant morbidity and mortality globally. However, most pre-cancers are easily treatable such that early detection of cervical abnormalities is critical in improving patient prognosis. Despite the success of current cervical cancer screening methodologies, these techniques are still limited in accuracy, leading to undetected cervical lesions or unnecessary biopsies.

This dissertation will focus on the development of two optical modalities for early detection of cervical dysplasia: angle-resolved low coherence interferometry (a/LCI) and multiplexed low coherence interferometry (mLCI). Originally, a/LCI was developed as a clinical technique for detecting esophageal dysplasia by detecting nuclear enlargement in the basal layer of the epithelium. To improve the clinical utility of a/LCI, a novel processing algorithm was developed using a continuous wavelet transform (CWT) based analysis of the a/LCI data which demonstrated significant improvement in processing speed compared to previous analysis techniques. Future development of this algorithm may open the possibility for real-time clinical analysis of a/LCI data, improving the clinical utility of the instrument.

In addition, the a/LCI instrument was adapted for cervical imaging, and a clinical feasibility study was performed to determine the effectiveness of using a/LCI nuclear morphology measurements for detecting cervical dysplasia. a/LCI optical biopsies were taken from 63 distinct tissue biopsy sites and compared to histopathological analysis of co-registered tissue biopsies. Analysis of the a/LCI nuclear morphology data found a significant increase in the nuclear diameter in the basal layer of dysplastic tissue sites and demonstrated high sensitivity and specificity (both >0.80) for detection of cervical dysplasia and high-grade squamous intraepithelial lesions.

Secondly, mLCI was adapted for collecting A-scans over the cervical epithelium. An mLCI cervical probe was designed and a clinical study was conducted to image 50 patients with the new device. Linear discriminant analysis was performed on the mLCI data to automatically classify the cervical A-scans as either endocervical or ectocervical tissue towards the goal of automatic delineation cervical transformation zone. This device can be combined with a/LCI to direct optical biopsy scans to areas on the cervix which are most likely to harbor tissue dysplasia.

Finally, the two technologies were incorporated into a single multimodal imaging system. First, a benchtop scanning a/LCI system was developed by incorporating an image rotator and 2D scanner into the system to enable radial scanning on the sample. This system was integrated into a handheld probe for cervical imaging. Volumetric imaging using sparse depth scans and the scanning a/LCI technology was validated with a polystyrene microsphere phantom, and a pilot study was conducted to demonstrate the feasibility of using this instrument for comprehensive screening of cervical tissue for precancerous cells.