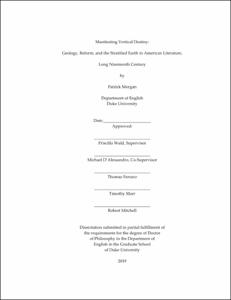 My project, Manifesting Vertical Destiny: Geology, Reform, and the Stratified Earth in American Literature, Long Nineteenth Century, excavates the cultural impact of the concept of the layered earth—or strata—in American fiction, non-fiction, and poetry. In the nineteenth century, the concept of strata changed the planetary narrative, revising theological interpretations of earth history, showing that the earth was much older than humanity and that humans were one element out of many contributing to this narrative, and a recent one at that. As they encountered deep piles of distinct rock layers in which humanity was absent, scientists realized that in the long story strata told, humanity was a new character rather than a central player. As they reached the general public, these stories elicited lively debates about the place of the human, anticipating many of the debates we are having today surrounding the question of the Anthropocene. Manifesting Vertical Destiny chronicles these debates and their social and political consequences.

In four chapters, I place scientists and literary writers side-by-side, demonstrating how they variously engaged the insights of geology provided by strata. Four thinkers exemplify the response to the newfound diminishment of the human by finding a new role for humans in this transformed cosmos. Literary writers Nathaniel Hawthorne and Emily Dickinson assert the force of imagination for human preservation, using their literary works to transform the erasing power of telluric force into a power to reclaim the human. Similarly responding to the smallness of the human, the geographer George Perkins Marsh and the early American geologist William Maclure channel the stratigraphic imagination into new accounts of humanity writ large. Together, these figures show how strata inspired new ways of imagining the place of the human in society, while the literary case studies in particular demonstrate how the lessons of strata were working their way, metaphorically, into the collective imagination.

Ultimately, in looking downward, Americans discovered earth layers with no trace of the human. Such a conspicuous absence led these thinkers to pose the same question in the present: what are the limits of the human? In Manifesting Vertical Destiny, I show how the imaginative reconstruction of possible pasts within earth layers inevitably led Americans to reconsider the present and a hoped-for future. Geology and reform are intimately linked because, as Americans learned how to read the layered earth, they realized that each transition from one stratum to another marked a radical transformation in environment: the verticality of stacked-up layers denoted alternative places and times, in the form of ancient environments, within the same geographical point. The absence of the human within these many earth layers led nineteenth-century thinkers to question the impact of humans in their contemporary moment, pushing the boundaries of what was possible, from Hawthorne’s transformed literary vision to Dickinson’s argument for gender equality in the sciences, Maclure’s radical realignment of economic class, and Marsh’s evangelization of environmental ethics. For these scientists and literary writers did not merely dally in earthly depths—they claimed verticality.