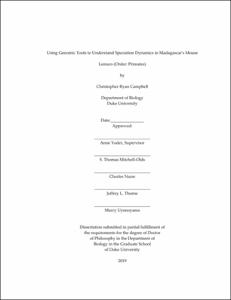 Mouse lemurs (genus Microcebus; Order Primates) are endemic to the island nation of Madagascar. These small, nocturnal primates offer a unique mammalian system ideally suited to study the patterns and processes of speciation, and the genomic revolution of the past decade has presented us with novel tools to test and understand these lineage-specific dynamics.

This thesis presents three independent projects on the speciation dynamics within mouse lemurs, interconnected by their utilization of the entire genome as a tool for reconstructing hidden evolutionary processes. Chapter 2 is an overview of the exploding field of speciation genomics and serves to ground these individual projects in evolutionary theory. In Chapter 3, we adopt a genome-wide approach to understand how the changing landscape of Madagascar has shaped the phylogeography of mouse lemurs while simultaneously leveraging the patterns derived from these species to discern clues about the ecology on the island in the distant past, and thus the impact of more recently arriving humans. The phylogenetic and population genetic patterns in a five-species clade of mouse lemurs suggest that longitudinal dispersal across the island occurred until approximately 500,000 ybp when a large ancestral population experienced rapid diversification, resulting in the present-day distributions of these species. However, the accuracy of the estimates of species ages from genetic data are limited primarily by our understanding of the mutation generation process in this non-model species. Thus, in Chapter 4, we improve these estimates by using high-coverage linked-read sequencing to estimate the generational de novo mutation rate within a family pedigree (n=8) of grey mouse lemurs (Microcebus murinus). We estimated a mutation rate of 1.64x10-8 mutations per basepair per generation, higher than nearly all mammals that have been previously characterized. Because estimates of these biological metrics critically affect estimates of divergence time we reanalyzed the results presented in the previous chapter and discover considerably more recent divergence times across the five-species clade. Finally, in Chapter 5, we utilize the knowledge of functional processes housed within genomic data to investigate the underlying causes of speciation in Microcebus. While many of the initial applications of genomic data in the genus have centered around understanding the phylogenetic relationships among the species rather than the mechanisms that underlie their diversification, we attempt to utilize genomic annotations to assess a putative mechanism driving speciation. We compared the rates of positive selection within sperm genes and a set of randomly drawn genes to look for the presence of positive selection. These comparisons reveal an elevated dN/dS, and thus evidence for positive selection, in sperm fertilization-related genes relative to sperm construction-related genes and a similarly-sized set of randomly-drawn genes. The results provide data that support our current knowledge of the behavior and natural history of these primates, highlighting what could be genomic mechanism of speciation among these highly speciose primates of Madagascar. In doing so we hope to have shown that detailed questions relating to both the extrinsic (e.g., inter- and intra- population and ecological interactions) and intrinsic (e.g., genome content and architecture) forces that drive speciation can be asked and answered, especially in non-model species.