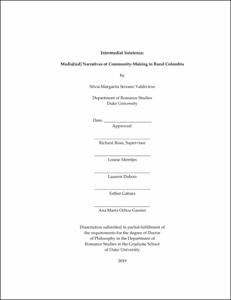 In mid-twentieth century, Colombia’s illiteracy rate was 40% with numbers close to 80% in the rural areas. These areas lacked access to formal education and were isolated from the urban centers due to poor road infrastructure. Radio Sutatenza, an educational radio station, promised to educate and integrate rural communities to the nation through radio literacy campaigns and its pedagogical model of Fundamental Integral Education. Unlike previous sociological, pedagogical, and communicational studies of the Sutatenza project, Intermedial Sutatenza highlights the project’s political and aesthetic dimensions. Dialoguing with theories and concepts from literary, cultural, and sound studies, I analyze cultural and media productions by officials and listeners of Radio Sutatenza. I focus, specifically, on radio dramas produced by the station and on coplas and songs composed by listeners, then broadcast in radio shows, and published in the print weekly El Campesino. I propose that these cultural productions are best described as intermedial narratives to highlight their many inner contradictions and the mediated context in which they emerge. Also, in their blurring of media and genre borders, these narratives dwell between the aural and the written and emerge as embattled fields of meaning production. I argue that Sutatenza’s intermedial narratives show that the radio station undertook both a continuity of and a departure from the Hispanic-Catholic project of a nation put in place in Colombia by the grammarian presidents in the nineteenth century. Likewise, I sustain that Sutatenza reproduced and remediated the literary movement of costumbrismo and the literary genre of the cuadro de costumbres, with its ideological implications, in sonic media for a twentieth century audience. At its core, my dissertation proves that the othering of rural individuals in Colombia took place also in the radio, and that Radio Sutatenza, with its far-reaching pedagogical strategies, had a fundamental role in the construction and circulation of a specific kind of rural individual and of rurality. At the same time, my work shows that, in the interstices, polysemy and the instability of the sign and the word permit for voices of resistance to emerge. Hence, the Sutatenza narratives, on the one hand, strive to unite and homogenize rural communities, and on the other, circulate and broadcast those same communities’ cultural heterogeneity. Through this examination, I clarify the role of Radio Sutatenza in Colombian community-making processes and radio’s part in narrating the nation during mid-twentieth century. Moreover, the questions I explore and the questions the dissertation opens-up are central in a country where unequal land ownership and rural labor exploitation are at the base of a more than half a century-long violent conflict. The ultimate goal and significance of my research is that it will lead to a recasting of the discourses (historical, sociological, cultural) about Colombian rural communities.