Lucian and the Atticists: A Barbarian at the Gates 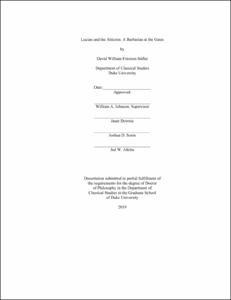 This dissertation investigates ancient language ideologies constructed by Greek and Latin writers of the second and third centuries CE, a loosely-connected movement now generally referred to the Second Sophistic. It focuses on Lucian of Samosata, a Syrian “barbarian” writer of satire and parody in Greek, and especially on his works that engage with language-oriented topics of contemporary relevance to his era. The term “language ideologies”, as it is used in studies of sociolinguistics, refers to beliefs and practices about language as they function within the social context of a particular culture or set of cultures; prescriptive grammar, for example, is a broad and rather common example. The surge in Greek (and some Latin) literary output in the Second Sophistic led many writers, with Lucian an especially noteworthy example, to express a variety of ideologies regarding the form and use of language. A number of authors, including Lucian, practiced Atticism, the belief that the best literature wouldn be made possible by reviving the Attic dialect of Classical Athens, language of Plato and Aristophanes. Others, however, disagree with the narrow and perhaps pretentious version of Greek this ideology produced; intriguingly Lucian was a member of this group as well. This study examines Lucian’s complex and contradictory attitudes towards linguistic practices, focusing the works of his that address Atticism and other linguistic topics—such as the degree to which mastery of a language and its culture will allow one to identify with that culture. Here, too, Lucian portrays the relationship between linguistic practice and cultural identity in several different ways. Investigations into the linguistic views of other authors of the period help answer the question of which contemporary ideologies Lucian may be drawing on for his satire. The dissertation concludes that the detailed, specific humor of Lucian’s linguistic satire is tied into his overall project of creating a distinctive ethnic, cultural, and linguistic position for the self-representation of his disparate personae.