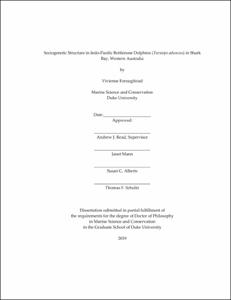 Kinship plays a fundamental role in the evolution of social systems and is considered a key driver of group living. The quantity and quality of an individual’s social relationships can have significant fitness effects, and individuals often preferentially associate with close relatives, behavior which amplifies such benefits via inclusive fitness. Nevertheless, reproductive variation, dispersal, and mortality can alter kin availability. Here I investigate the repercussions of kin availability on social network structure in a fission-fusion population of Indo-Pacific bottlenose dolphins in Shark Bay, Western Australia. In my first chapter, I used data from next-generation sequencing to assign parentage and estimate genetic relatedness within the study population. I compared relatedness estimates to a multi-generational maternal pedigree and showed that these methods could classify up to third-degree kin with over 85% accuracy. Additionally, I conducted a series of social network analyses to measure how accuracy and precision of relatedness estimation influenced statistical power in these downstream analyses. In my second chapter, I assess different social association indices for their ability to predict interaction rates. Group membership is commonly used as a proxy for interaction, and this assumption can rarely be tested for cetaceans due to the difficulty of observing interactions which are often infrequent at the sea surface. To validate this assumption, I used two different data streams, group scan-sampling, used to generate group membership and association rates, and individual focal follows, used to calculate interaction rates. I input several association indices into a spatially explicit null model, and compared interaction rates between affiliates, i.e., pairs whose association rate significantly exceeds expectations, and non-affiliates. I show that an index incorporating group size performs the best across most examined scenarios, but the most commonly used indices, half-weight and simple ratio, perform similarly. In my third chapter, I investigate how the availability of kin shapes individual position within a social network. I measured females’ propensities to form relationships with both related and unrelated individuals, and showed that females have strong preferences for both close matrilineal kin and close non-matrilineal kin. Individuals also frequently affiliate with more distant kin, and only the availability of distant kin affects the total number of affiliative bonds that an individual forms. Individuals with fewer close matrilineal kin formed more bonds with unrelated individuals. These models suggest that while dolphins have strong kin preferences that shape some aspects of gregariousness, they are also socially plastic, and can compensate for the lack of preferred kin partners by forming affiliations with unrelated individuals. Together, my results provide guidelines for studying the effects of relatedness on social networks in wild populations. I demonstrate significant effects of kin availability on both direct and indirect connectivity within a social network, which have implications for understanding the structure and function of networks in animal societies.