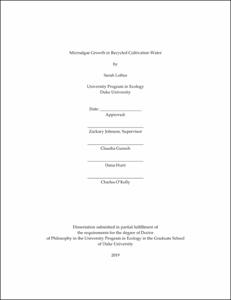 A cost-saving strategy of large-scale algae cultivation that can lead to more economical production of algal food, feed, and fuels involves reusing the cultivation water after algae harvesting. Few studies have focused on predictors of algae growth success in reused water, or explained these results in terms of algal ecology. Factors such as dissolved organic matter accumulation and interactions with bacteria are also understudied in the context of water reuse, yet could inform cultivation decisions to maximize water reuse without losses in algal productivity. This dissertation investigated trends in previous studies and also used an experimental approach to determine how reusing cultivation water affects algae growth, dissolved organic carbon (DOC) accumulation, DOC release rates, and relative abundances of bacteria. Based on over 80 previous studies testing algae growth in reused water, algae taxon was the only factor significantly associated with algae growth response. A possible explanation for this result could be differences in the amount and composition of DOC excreted by different algae. I therefore experimented with three taxonomically and physiologically distinct algae, two diatoms and a green alga, to test their growth responses, DOC excretion rates, and the extent of DOC accumulation in reused water. Algae growth response in reused water varied by algae, yet was not correlated with DOC concentrations. Additionally, DOC concentrations steadily increased with each water reuse, suggesting a build-up of recalcitrant DOC after bacteria, or possibly algae, degraded more labile DOC. To further explore the extent of strain-specific growth responses, I tested the effect of reused water from a self-inhibitory algae strain on other algae strains. This reused water did not inhibit two other algae strains, suggesting that the inhibitory mechanism was strain-specific and was likely from build-up of a certain DOC compound. Across the three algae cultures, different bacteria taxa became enriched or depleted in reused water, despite all cultures being exposed to the same reused water source. DOC composition and concentration in reused water were therefore likely not driving observed differences in final bacteria communities, and DOC produced from the growing algae may be more influential. Overall, results from this dissertation support strain-specific features of algae growth responses, and suggest that algae screening processes should include tests in reused water. Identifying algae strains with uninhibited growth responses will be important for implementing water reuse for algae cultivation, to ultimately improve the economic feasibility of algae bioproducts.