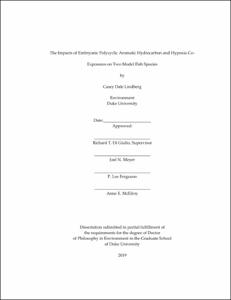 Organisms are routinely subjected to a variety of environmental and chemical perturbations simultaneously. Often, these multi-stressor exposures result in unpredictable toxicity that occurs through unidentified mechanisms. Here, we focus on polycyclic aromatic hydrocarbons (PAHs) and hypoxia, two environmental and physiological stressors that are known to co-occur in the environment.

Simultaneous exposures to PAHs and hypoxia result in exacerbated toxicological phenotypes in several fish species. For example, while exposures to the individual stressors resulted in few observed effects, zebrafish embryos simultaneously exposed to hypoxia and individual PAHs as well as PAH mixtures developed severe cardiovascular deformities and trunk abnormalities. This dissertation aims to better understand how these two stressors interact, what other phenotypes of toxicity are associated with co-exposures, and how wild-caught fish, including PAH-resistant fish, respond to co-exposures of PAHs and hypoxia.

Several locations in the Elizabeth River (VA, USA) are highly contaminated with PAHs, due to the release of creosote mixtures from wood treatment facilities. Interestingly, some populations of Atlantic killifish (Fundulus heteroclitus) inhabiting the Elizabeth River (ER) are resistant to PAH-induced teratogenesis. However, evolutionary resistance to PAHs due to chronic PAH exposure is associated with reduced fitness and increased susceptibility to other environmental stressors in at least one PAH-resistant killifish population. The first objective of this dissertation was to investigate this association further by examining a previously under-studied population captured from a creosote-contaminated site in the Elizabeth River, Republic (Rep). We assessed PAH toxicity and effects on energy metabolism in Rep killifish in comparison with killifish from the reference site Kings Creek (KC). We also investigated the effects of hypoxia as a secondary stressor on KC and Rep killifish; we assessed phenotypes of co-exposure in killifish, as well as whether PAH-resistance inferred greater vulnerability to hypoxia during embryonic development.

Initially, killifish captured from the Rep and KC sites were exposed to an individual PAH-type chemical, beta-naphthoflavone (BNF), a simple mixture of benzo(a)pyrene (BaP) and fluoranthene (FL) or a real-world complex PAH mixture known as Elizabeth River sediment extract (ERSE). Wild-caught adults and F1 embryos were assessed for CYP1A activity, F1 embryos were assessed for cardiovascular deformities and alterations in bioenergetic metabolism, and F1 juveniles were also assessed for alterations in bioenergetic metabolism. Following exposures to simple and complex PAH mixtures, Rep killifish exhibited several phenotypes associated with PAH resistance including decreased incidences of developmental cardiovascular deformities and recalcitrant cytochrome P450 1A (CYP1A) activity, results which led us to classify them as “PAH-resistant.” Rep embryos and juveniles also exhibited signs of altered metabolic rates. Rep embryos had significantly higher routine metabolism compared to KC embryos and juvenile Rep killifish had significantly lower maximal metabolic rates and aerobic scopes than KC juveniles. These results suggest that populations of killifish that have adapted or evolved to withstand the toxicity associated with PAHs consequently have altered energetic metabolism or demands. Such consequences could result in an enhanced vulnerability to other environmental and anthropogenic stressors in PAH-resistant killifish.

We further explored this hypothesis by subjecting Rep and KC killifish to hypoxia as a secondary stressor. Again, Rep and KC killifish were exposed to ERSE, this time with and without diurnal hypoxia for the extent of embryonic development (14 days). Killifish embryos were assessed for CYP1A activity, cardiovascular deformities, heart rate, hatch rate, larval body length, and other larval abnormalities.

Hypoxia suppressed the induction of CYP1A usually seen with PAH exposures. However, it did not exacerbate the frequency or severity of cardiovascular deformities in either population. Regardless, hypoxia exposure lowered the heart rate of embryos from both killifish populations. Additionally, there were severe effects of co-exposures on hatch rates, which was especially evident in Rep embryos.

However, PAH-resistant embryos appeared to be at an advantage when the secondary stressor was hypoxia: Rep embryos co-exposed to hypoxia and PAHs had greater rates of survival and hatch rates, and fewer incidences of severe cardiovascular deformities than KC embryos. These results directly contrast with other work which has found that larval PAH-resistant killifish are more susceptible to hypoxia than larvae from reference killifish populations. While PAH and hypoxia co-exposures did not cause interactive toxicity in many of the endpoints assessed, the effects of co-exposures on hatch rates and heart rates could have severe implications for embryonic bioenergetics and larval survival, leaving exposed embryos more vulnerable to other types of stress or unable to meet energetic demands.

The second objective of this dissertation, which utilized zebrafish (Danio rerio) as a model organism, was to identify other pathways that could either influence or be influenced by co-exposures of PAHs and hypoxia. Endpoints of interest targeted the oxidative stress response and mitochondrial function due to their known roles in PAH and hypoxia toxicity and visible effects on bioenergetics seen during completion of the previous objective. We hypothesized that co-exposures would not only cause interactive toxicity in these two pathways, but that these pathways might play a role in the exacerbated toxicity seen with co-exposures.

Zebrafish embryos were exposed to ERSE and hypoxia, both simultaneously and individually. They were assessed for a range of endpoints targeting mitochondrial function and oxidative stress directly after removal from 24-hour exposures and up to 18 hours of recovery time in clean media; assays used in this work included measurements of oxygen consumption and mitochondrial function using the Seahorse Extracellular Flux Analyzer, mitochondrial DNA damage and copy number, ATP content, mitochondrial-specific superoxide production, apoptosis, antioxidant enzyme activity, alterations in gene expression, and developmental deformities.

However, while PAH and hypoxia exposures caused a diverse array of effects, there appeared to be very little interaction between the two stressors in the co-exposure group. Co-exposed embryos exhibited phenotypes associated with both types of exposures, but there were rarely any visible interactions due to co-exposures. Regardless, both pathways are clearly responsive to individual exposures and co-exposures of PAHs and hypoxia. Additionally, co-exposed embryos exhibited toxicity associated with both stressors, which indicates that the co-exposures pose a greater risk to organismal health compared to exposures of the individual stressors alone.

Combined, these results highlight several key factors regarding co-exposures of not just PAHs and hypoxia, but potentially other multiple-stressor scenarios as well: 1) co-exposures can cause toxicity through unexpected mechanisms and result in unpredictable toxicological phenotypes; 2) developmental stage during exposures and timing of exposures are often critical in determining the toxic effects of stressors in developing organisms; and 3) even similarly related model organisms can exhibit different responses to the same exposures. Therefore, it is extremely important that we continue to investigate different combinations of stressors with a broad array of model organisms and a range of developmental time points in order to truly understand how multiple stressor scenarios will impact ecosystem health.