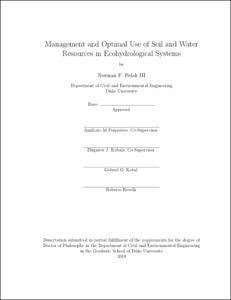 Human activities are shifting hydrological and biogeochemical cycles further from their natural states, often resulting in negative impacts on the environment. Because of increased pressures due to climate change and population growth, it is important to understand how human activities affect soil and water resources and how these resources can be managed sustainably. This dissertation presents a series of works which relate to the sustainable management of soil and water resources. In general, we make use of parsimonious ecohydrological models to describe key components of the soil and water system, and random hydroclimatic variability is accounted for with stochastic forcing. Methods from dynamical systems theory are also applied to further the analysis of these systems.

Initially we focus on soil resources, the impacts of vegetation on soil production and erosion and the feedbacks between soil formation and vegetation growth are ex- plored with a minimal model of the soil-plant system, which includes key feedbacks, such as plant-driven soil production and erosion inhibition. Vegetation removal re- duces the stabilizing effect of vegetation and lowers the system resilience, thereby increasing the likelihood of transition to a degraded soil state. We then turn our at- tention to water resources. Rainwater harvesting (RWH) has the potential to reduce water-related costs by providing an alternate source of water, in addition to relieving pressure on other water sources and reducing runoff. An analytical formulation is developed for the optimal cistern volume as a function of the roof area, water use rate, climate parameters, and costs of the cistern and of the external water source, and an analysis of the rainfall partitioning characterizes the efficiency of a particular RWH system configuration. Then we consider nutrient management in addition to sustainable soil and water resources. Crop models, though typically constructed as a set of dynamical equations, are not often analyzed from a specifically dynamical systems point of view, and so we develop a minimal dynamical systems framework for crop models, which describes the evolution of canopy cover, soil moisture, and soil nitrogen. Important crop model responses, such as biomass and yield, are calcu- lated, and optimal yield and profitability under differing climate scenarios, irrigation strategies, and fertilization strategies are examined within the developed framework. Important in the use of crop and other ecohydrological models and studies on soil and water resources is the representation of soil properties. Soil properties are determined by a complex arrangement of pores, particles, and aggregates, which may change in time, as a result of both ecohydrological dynamics and land management processes. The soil pore size distribution (PSD) is a key determinant of soil properties, and its accurate representation has the potential to improve hydrological and crop models. A modeling framework is proposed for the time evolution of the PSD which takes into account processes such as tillage, consolidation, and changes in organic matter. This model is used to show how soil properties such as the water retention curve and the hydraulic conductivity curve evolve in time. Finally, in order to explore the coupled evolution of soil properties, ecohydrological processes, and crop growth, we couple a dynamic crop model with a soil biogeochemistry model and the previously developed model for the evolution of the soil PSD.