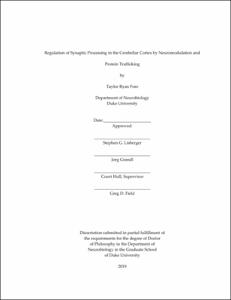 Examining the coordination of excitatory and inhibitory (E/I) activity within cortical circuits is a fundamental approach to understanding normal and aberrant circuit function. Alteration to this E/I coordination is one of the leading pathophysiological models for several neurological disorders, including epilepsy, schizophrenia, ADHD, and autism spectrum disorders (ASD) (Nelson et al. 2015, Mullins et al. 2016). The overarching goal of this research is to understand the mechanism that regulates excitatory and inhibitory coordination within the cerebellum. Using a range of techniques to monitor and manipulate cortical circuits; I examined how the neuromodulator, acetylcholine, alters E/I activity at the initial input stage of the cerebellar cortex, the granular layer. Additionally, in a collaboration with Dr. Hatten's group at Rockefeller, we investigated the post-migratory role of Astrotactin 2 (ASTN2), a risk gene for autism; and found a role in regulating the surface level expression of synaptic proteins. By investigating how basic circuit function is modified in a transient manner, i.e. neuromodulation, we can reveal mechanisms that facilitate context-dependent learning; moreover, by examining permanent modifications, e.g. ASTN2, to circuit function, we can begin to understand neural mechanisms that underlie both normal synaptic function and the pathophysiology of ASDs.

These studies revealed the following: 1) acetylcholine actively modifies two out of three main nodes - excitatory mossy fiber terminals and inhibitory Golgi cells - within the granule cell layer. This modulation resulted in a bidirectional change in the excitability of granule cells, suggesting that cholinergic circuits within the granule cell layer are well situated to alter information processing in a context-specific manner. 2) ASTN2 binds and regulates the surface expression of multiple synaptic proteins via endocytosis. A truncated form of ASTN2 (ASTN2-JDUP), resulting from copy number variation in its FNIII and MAC/Perforin domains, occurs in patients with neurodevelopmental disorders. Investigations into this JDUP variant revealed changes in the binding affinity to several different binding partners, including neuroligins 1-4. Additionally, conditional overexpression of JDUP or ASTN2 in Purkinje cells, revealed differential changes in postsynaptic glutamatergic and GABAergic activity. Overall, these ASTN2 results lay the foundation for future studies using an ASTN2 loss-of-function mouse model.