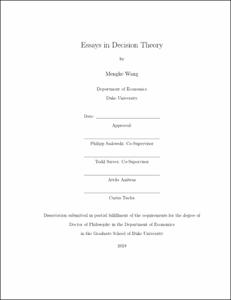 It is demonstrated that if a decision maker’s preference over random deadlines satisfies the von Neumann-Morgenstern independence axiom, then it is as if the decision maker’s optimal way to acquire information depends only on the menu she is presented with and is independent of the deadline. Moreover, if no information is lost along any path then the decision maker’s distaste for contingent planning becomes weaker as she is allowed more time to decide. The third chapter studies strategic situations where a population of heterogeneous players are randomly matched with each other to play games with strategic substitutes and players have incomplete information about their opponents' private types. If players hold type-independent beliefs about their opponents' types, then in equilibrium players' actions are monotonic with respect to their types. Since players' private types are often not observable to the analyst, to understand what kind of observable behavior can be explained by this model, a representation result is established for this model when the analyst observes how the population behaves on an aggregate level. Of course, a model with type-independent beliefs may not be justified, since types could be correlated in many applications. Moreover, in experiments where individuals are randomly matched to play games with strategic substitutes, they report systematically heterogeneous conjectures about their opponents' actions: Players who act more aggressively also conjecture that their opponents would act more aggressively. This not only contradicts the type-independent belief model, but is also counterintuitive because in games with strategic substitutes, opponents' aggressive behavior discourages players from playing aggressively. A model is then proposed where players have self-similar beliefs. It captures the intuition that higher types believe that their opponents are also of higher types and fits the experimental observations. One important and surprising result is that models with type-independent beliefs and self-similar beliefs are observationally equivalent for many payoff parameters, that is they have identical behavioral implications.