The development, characterization, and clinical investigation of a novel reusable radiochromic sheet for 2D dose measurement 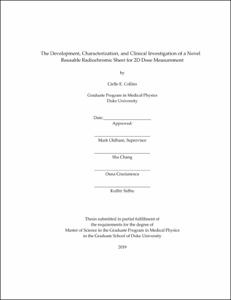 Purpose: Radiochromic film remains a useful and versatile clinical dosimetry tool. While simple to use, current film options are single use, with no forms of reusable film available commercially. Here we introduce a novel 2D radiochromic sheet, derived from Presage material, which optically clears after irradiation and can be reused. We evaluate the sheets for potential as an economic alternative to radiochromic film and also as a radiochromic bolus with capability for dose measurement.

Methods: A novel derivative of reusable Presage® was manufactured into thin sheets of 5mm thickness. The sheets contained 2% cumin-leucomalachitegreen-diethylamine (LMG-DEA) and plasticizer (up to 25% by weight). A series of radiation experiments were performed to characterize the radiation response of the sheets irradiated with megavoltage radiation from a Varian medical accelerator over time and in different settings. The local change in optical-density (OD), before and after radiation, was obtained by scanning the sheets with a flat-bed film scanner and extracting the red channel of the RGB image. Repeat sheet scanning enabled investigation of the temporal decay of OD. Additional studies investigated dose sensitivity, consistency of response through repeat irradiations, intra and inter-sheet reproducibility, multi-modality response (electrons and photons), and temperature sensitivity (temperature range 22°C to 36°C) of the Presage® sheets. Clinical utility of the sheets was investigated through application to IMRT treatment plans (prostate and a TG119 commissioning plan), and a chest wall electron boost treatment. In the latter test, the sheet performed as a radiochromic bolus.

Results: The radiation induced OD change in the sheets was found to be proportional to dose and to decay to baseline after ~24 hours with a decay constant of 6.0 hours-1 (standard deviation 0.33). After this time the sheet could be reused and had similar sensitivity (within 1% after the first irradiation) for at least 8 irradiations. Importantly, the sheets were not observed to carry any memory of previous irradiations within measurement uncertainty. The consistency of dose response from photons (6MV and 15MV) and electrons (6-20MeV) was found to be within 1%. The dose sensitivity of the sheets was observed to have a temperature dependence of 0.0012 ΔOD/°C. For the IMRT QA verification test, good agreement was observed between the Presage sheet and EBT film (gamma pass rate of 97% at 3% 3mm and 99% at 5% 3mm dose-difference and distance-to-agreement tolerance, with a 10% threshold). For the TG-119 tests the gamma agreement was 93% pass rate at 5% 3mm, 10% threshold, when compared with Eclipse. For the electron cutout treatment, both Presage and EBT agreed well (within 2% RMS difference) but differed from the Eclipse treatment plan (~7% RMS difference) indicating some limitations to the Eclipse modeling in this case.

Conclusion: The reusable Presage sheets show promise as an economic alternative for film applications and as a radiochromic bolus for in-vivo dose measurement. The preliminary work presented in this thesis indicates that these sheets have the capability to improve care in the most well-equipped clinics in the world, as well as provide a fast, inexpensive, and easy to use dosimeter to clinics in low-income countries in desperate need of versatile resources. This work is still a preliminary study of feasibility, where the central current limitations include the narrow nature of application testing and lack of inter-batch comparison. Further work is recommended to establish use in a wide variety of clinical applications, establish a material more closely reflecting flexible bolus, and push the extent of the potential for reusability in the sheets.