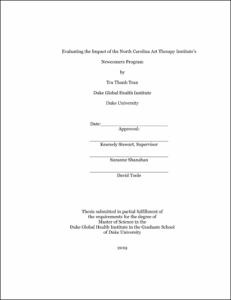 Refugees and asylum seeking children (Newcomers) enter the U.S.A. with little psychosocial support, despite having consistently higher rates of mental health problems. Art therapy has been seen as a potentially powerful intervention that can be implemented in high income countries with marginalized communities. Given art therapy’s un-centering of English, this mental health intervention is widely used within civil society but has not been rigorously evaluated. This study adds to the growing literature that examines the impact of art therapy interventions for Newcomer populations. We evaluated the impact of the North Carolina Art Therapy Institute’s (ATI) Newcomer’s Program, to inform further implementation of the Newcomer’s Program. In addition to the evaluation, we wanted to compare two forms of implementation, an intense weeklong “summer camp” program vs. a semester-long school-based program. This study used a mixed methods approach to assess the impact and value of the Art Therapy Institute’s (ATI) Newcomer’s Program in Durham, NC with Newcomers aged 4-14. The study, conducted in Fall 2018 in Durham, NC, compared two styles of implementation, a summer camp program (Number of youth = 31) and a school-based program (Number of youth =53). The number of hours of therapy remained consistent between programs (hours = 10.5) to allow us to compare. Qualitative data was collected after each implementation of the Newcomer’s Program with parents of refugee youth (N=2) and therapists (N=5). We found that the Newcomer’s Program had modest impact in reducing hyperactivity and inattention in both arms, and had statistically significant increase in prosocial behavior for the school-based program. Despite the modest impact observed, interviews with therapists and parents highlighted implementation challenges and non-quantifiable impact. This study has highlighted the need for further examination of the positive effects of art therapy interventions with Newcomer populations.