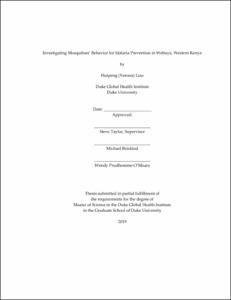 Insecticide-treated bed nets (ITNs) are widely used in Kenya to prevent the mosquitoes, which can transmit malaria, from biting people at night. However, there is a concern that mosquitoes become resistant to the ITN environment by changing their feeding behavior. The research goal was to observe the current feeding behavior of female Anopheles in Webuye, Western Kenya. Prokopack aspirators, CDC light traps, and sticky barrier screens were used for mosquito collection during May – July 2018. 662 collected female Anopheles, most of which were Anopheles gambiae sensu lato, were included. Descriptive and statistical analyses were applied, and the results show that the feeding proportion was 79.3% in mornings and 13.7% at nights, which was not significantly affected by the frequency of bed net use. 35.9% and 4.3% of the female Anopheles were human and Plasmodium (P.) Falciparum gDNA positive, respectively. Most of the P.falciparum positives were also fed and human gDNA positive, meaning that most of the infected or infectious mosquitoes had human blood meals and may have already attended malaria transmission. The study failed to observe outdoor feeding behavior by sticky barrier screens, and behavioral adaptation may not be responsible for most of the persistence of transmission. The study implicates a full investigation of ITN condition, more research on chemical resistance, and further surveillance of mosquito biting time.