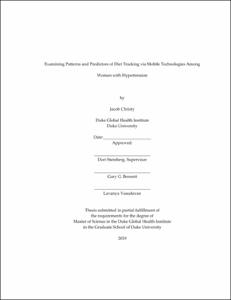 Background: Hypertension is a primary risk factor for cardiovascular disease. Studies have shown that hypertension may have a more severe effect on cardiovascular disease outcomes among women. To mitigate this risk of hypertension in women, evidence supports that the DASH (Dietary Approaches to Stop Hypertension) diet as an effective treatment. Despite decades of evidence supporting the efficacy of the DASH diet to treat hypertension, compliance to DASH remains consistently low across all populations. However, given the importance of self-monitoring for producing behavior change, innovative efforts that utilize this strategy are needed to improve adoption of DASH on a population level. Methods: This thesis is a secondary analysis of 3-month digital health intervention (DASH Cloud) to improve adoption of DASH among high risk women conducted in Durham, NC at Duke University. Participants (N= 59) were allocated into the DASH Cloud arm (N= 30), or the attention control arm (N = 29). Both groups received publicly available booklets about the DASH diet and were asked to self-monitor their diet using a commercially available diet tracking app. Only the intervention arm received personalized feedback about their compliance to the DASH diet and skills training videos via text message. The goal of this study was to understand patterns and predictors of self-monitoring via the diet tracking app. Results: Overall, the median proportion of self-monitoring engagement was 76%. By treatment arm, the median proportion of engagement in the DASH Cloud arm and attention control arm was 68% and 85%, respectively. Significant predictors of self-monitoring include those who had 100% engagement during the first two weeks and first month of the study, had marital support, lower BMI, at least a college degree, insurance, a negative perception of their food environment, were somewhat comfortable with using apps and less likely to use an app to track medication adherence. Conclusion: This study provided evidence that self-monitoring of diet is high within the context of an intervention aimed at using digital health to promote compliance to the DASH diet among high risk women. The strongest predictor of self-monitoring engagement was early engagement. This suggests that interventions aiming to improve rates of self-monitoring an improve uptake of DASH using diet tracking apps should aim to improve early engagement to achieve success overall. However, given the small sample size of the study, future studies should include a larger population to describe patterns of self-monitoring and ascertain other predictors of engagement.