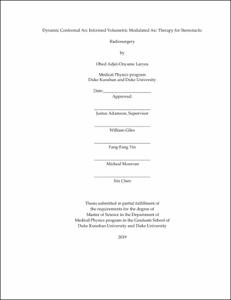 Purpose: Linear accelerator-based Stereotactic Radiosurgery (SRS) is often performed using either dynamic conformal arcs or VMAT. For multifocal disease, multifocal conformal arc techniques can struggle to deliver the desired dose with high conformity for all targets simultaneously. While VMAT may improve coverage and conformity, and can offer the planner more flexibility, it can result in highly modulated treatment plans with non-intuitive MLC trajectories. The complex MLC modulation trajectories can often struggle to shield healthy areas between targets, thus leaving open gaps being irradiated between targets. The purpose of this research is to overcome these limitations by developing a technique for SRS of multifocal targets that combines the intuitive MLC trajectories of dynamic conformal arcs with the flexibility of VMAT.

Methods: A Conformal Arc Informed VMAT (CAVMAT) planning technique was developed in which arcs are assigned subgroups of targets, for which the MLCs are able to effectively conform to all targets in the subgroup. Arc weights are optimized to achieve desired dose per target while minimizing the variation in MU per arc. The optimized conformal arc plan then serves as the starting point in a VMAT inverse optimization to fine tune the dose to each target, optimize conformity, and meet any plan specific objectives. To demonstrate feasibility, ten multifocal VMAT cases were re-planned using the CAVMAT technique. The following metrics of plan quality were used to compare VMAT with CAVMAT: volume of healthy brain receiving 6Gy, 12Gy, and 16Gy, conformity index, and total number of monitor units.